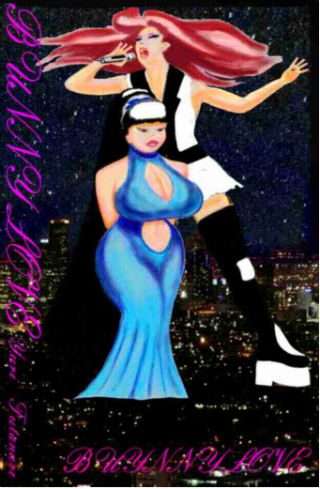 Not aware Marge was in the room, Jacqueline, without her fat suit, was dancing in her silk bikini briefs and bra…

Jacqueline Shunokoi was born to very wealthy parents. They own Shunokoi Aerospace Corporation, and live in the United States. Jacqueline is blind but she is able to walk around using her sense of echolocation.

Secretly intersex, Jacqueline’s life is far from normal; her parents control every aspect of her life. Anna the “maid”, who is a professional protection person, looks after her as her parents are frequently away.

Jacqueline is very lonely. When at school her parents make her wear a fat suit to disguise the fact, she is intersex. She is bullied and persecuted; every day by other rich girls; and her teachers treat her as a pet, giving her menial tasks to do.

One day, she is being physically bashed, when suddenly, Marge, a very tall ruby red haired girl from the senior class steps in and saves Jacqueline.

Margret Cooper is the illegitimate daughter of a rock star. Tough, with a “do not mess with me” attitude, she has her own lesbian band, Bleeding Cyanide that is very successful. After passing Anna’s scrutiny, Marge becomes Jacqueline’s protector and only friend.

Marge calls Jacqueline Bunny as she reminds her of a cute cuddly rabbit. Friendship, turns to love that they slowly explore, all the while, sneaking around to rock concerts and parties.

Marge realizes that Bunny is a wonderful singer and seeing her without her fat suit, she cannot believe how beautiful she is. A plan develops to put Bunny on-stage at the next concert, to sing a song she has written. Bunny is so good; she becomes a media sensation overnight, which in itself brings a multitude of problems.

The least of these, she is stalked by Elaine Richutti, a nefarious murderer and paedophile; she runs a sex slave trade industry, and wants to kidnap Bunny to sell. Bunny and Marge wish to marry. During a rather heavy petting session, Marge gets pregnant. This causes uproar in the Shunokoi family, as both are not quite majority age.

This novel, keeps you turning the pages, wondering if Bunny and Marge will find a peaceful life together.

Yuri Futanari debut novel has taken an intersex person and a lesbian with whom she has created a beautiful romance, in a very sensitive and caring way. She obviously cares deeply about minority genders and this is evident in her writing. There is a sequel coming.