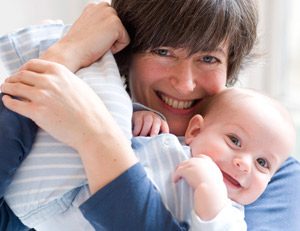 In Knock Yourself Up! A Tell-All Guide to Becoming a Single Mom, Louise Sloan talks about her experience getting pregnant on her own and speaks with dozens of women, both lesbian and straight, who chose kids now, dates later.

Dating in your 30s and 40s must be fun for some, but for me, it lacks a certain carefree, joie de vivre that characterized my gallivanting 20s. Kisses, sex, longing, first trips to the sex store—been there, done that. Now, talk to me about suckling infants, saying no to toddlers, and dealing with teenagers who shoplift, and I’m yours. I want a baby. Now. When I’m on a first date, I’m thinking, “How soon can we get pregnant?” not, “Will the sex be good?” Wrong, I know, but the mad hammer of bio clock has made every other concern in my life an annoying buzz.

Enter Louise Sloan, a lesbian facing the same scenario: Single, nearing the end of her fertile years and nary an appropriate partner in sight. But instead of crossing her fingers and booking two dinner dates per night, like me, she chose an alternate route. Sloan made a conscious, researched decision to artificially inseminate without a co-partner, or even a girlfriend. In Knock Yourself Up! A Tell-All Guide to Becoming a Single Mom, she talks about her experience (“sweet”), and speaks with dozens of women, both lesbian and straight, who chose kids now, dates later.

What was it like to make the decision to artificially inseminate, as a single woman?

I really agonized. I spent a lot of time contemplating all the dreadful, painful things that could happen to me as a result of doing it this way. None of that occurred. I expected [having a child this way] to be much more of a bittersweet experience, but really, it was pretty sweet. Pregnancy was hard on me, particularly when I was at home, alone. I wanted someone to share it with. I expected those feelings of sadness to last, but they went away.

When did the sadness go away?

When my son was born. I expected to feel sadness about not sharing him with someone, but I felt completely happy. And especially after seeing friends negotiate the smallest decisions in parenting, I felt some relief. Although, it would be nice to have a partner.

Did you date while pregnant? And what is it like to date, now?

I had some opportunities to date during my pregnancy, but I didn’t because I was still heartbroken over an ex. As much as I would love to have someone in my life, going out looking for love is extremely unappealing, now that there’s a $50 babysitting fee. Going out on a blind date—that’s potentially $50 for a dull evening, when I could be spending time with my son. Nowadays, I’d say “Would you like to go to the zoo with me and my son?” That weeds out a lot!

You’re openly lesbian in your book, but you address a readership that is both gay and straight. Is making this decision any different for lesbians?

With the straight women I talked to, their friends would start getting really negative. Their friends found it threatening to their own life choices. It was like, they were waiting for the knight in shining armor, so if anyone stopped waiting, and made a decision like this, it was [tantamount to] saying their own dream would never happen. This came up as an issue in almost every meeting of straight women [who were contemplating the choice of single motherhood]. It just wasn’t the same in the lesbian meetings.

Did you ever feel like you were giving up on a dream—the dream of finding the right woman and having a kid with her?

When I was in my 20s, I was in a long-term partnership. I would hear about the trials and tribulations of the single life, and I would think, I’m glad I’m not the kind of person who has to worry about that! My 30s were a lesson in humility. My relationships kept getting shorter and shorter—at one point I joked that any day now I’d be having sex in the park. I do remain hopeful, but the older I’ve gotten, the more I feel I don’t know anything about relationships.

How do you respond to people who say that having a child without a partner is narcissistic, or that it sets the stage for emotional incest?

Anybody can have a child for narcissistic reasons—married people, coupled people. Straight people can have kids because it’s expected all the time, and it can all look perfect on the outside, when it’s really not. Anyone, whether they have a partner or not, can form an incestuous bond with their child.

Also, not all co-parents will be good ones. To stay in a relationship that’s not right because you want a baby and a co-parent—that can be very damaging as well.

I did have fears about the child becoming the only important thing my life. Some women I met said they want to concentrate on their child for the next 20 years. I don’t think that’s particularly healthy for me or [my child]. Although, that’s a concern that’s not specific to single mothers. But maybe it is easier to go that route, when you are a single mom.

Did you have your own concerns about Scott not having another parent?

When I think about what Scott doesn’t have, in terms of a co-parent, I also think about what it would be like to share custody. A friend of mine shares custody, and it was just excruciating for her, particularly when her child was an infant.

And when I hear my friends bickering about child rearing, I can even feel grateful. That’s going to be my number one relationship challenge, in the future: being open to a partner who might disagree with me about parenting. If someone should say that Scott can watch 3 hours of TV a day, that would be an issue. My immediate response is, shut up! [Laughs.]

In your book, [lesbian author] Rachel Pepper says that as a single mom, she has more in common with a single, straight moms, than she does with coupled, queer moms. Is that true for you?

Isn’t that interesting! I don’t know if I’m there yet but I may be on my way. One thing that has been challenging, relationship-wise, is that my couple friends who have babies are quite regimented. My couple friends look at [my parenting] like, “What in the hell are you doing?” But I don’t get into the idea that the nap has to be at 12:37 or the child will die. It’s allowed me to maintain a social life, which has been great. Partly, these differences occur because my couple friends have a built in social life, as a result of being partnered. If I made the same choices that [my partnered friends] make, I’d be alone all the time.