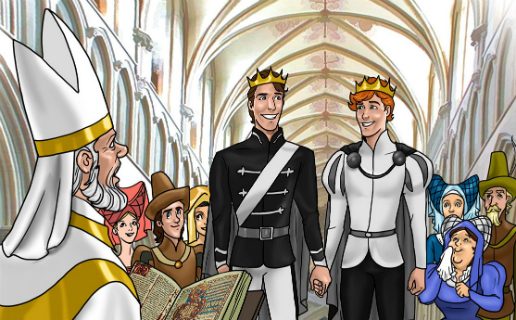 The Princes and the Treasure is a story of two princes embarking on a quest, but fall in love with each other.

The story of The Princes and the Treasure is a tale about two handsome princes who go on a quest to save a princess, but ultimately fall in love with each other, get married and live happily ever after.

The book has sold internationally and received considerable acclaim from readers young and old alike.  While it is a children’s book, it has broader appeal because of its unique twist on an age old classic.

The Princes and the Treasure is a book penned by Jeffrey A Miles,  a business professor at the University of the Pacific. Miles wanted to write a children’s picture book which featured same sex marriage and provided a broader representation of falling in love.  According to Miles,” I recalled fondly that I had crushes on the handsome princes, who looked so dashing and strong.

Both gay and straight couples alike adore the story owing to its universal appeal. But the book has also struck a chord with the kids, who love the story like any other famous fairy tales.

“Kids see that the story is about two people who fall in love and get married. All of the kids who have read the story don’t find it unusual that the two characters who get married happen to be two men. Kids seem to see that love can happen between two people regardless of the couple’s gender. I’ve been amazed how easy that idea is for kids to understand and how hard that is for some adults to understand.”

The book is available in 137 countries around the world and is available from all major e-book retailers such as Amazon, Apple iBooks and Google Play books.

The book is part of a series which is currently being penned by Miles. The next instalment in the series, “The Princes and The Dragon” sees the princes raise twins together. Miles wanted children to see how a loving same sex couple can build a loving family together.

The book is important, particularly for children as it shows that love and family are universal, regardless of a their gender. It will hopefully educate the next generation about diversity and potentially extinguish homophobia in the future. However, it is not just a queer text – it is also a charming tale about the universality of love.