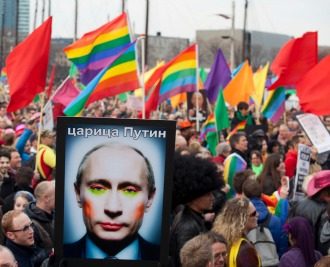 World leaders gathering in St. Petersburg this week must condemn Russia’s draconian homophobic law and do all in their power to persuade authorities to scrap it, Amnesty International said ahead of the G20 meeting

The law, which came into force last July, imposes fines on individuals and organisations accused of promoting “propaganda of non-traditional sexual relations” which it says could morally corrupt children.

“The law provides the framework for a state-sponsored discrimination and follows a pattern of abuse against LGBTI individuals, with officials systematically failing to investigate hate crimes.

“It is yet another measure in a long list introduced under Vladimir Putin’s current presidency to prevent people from enjoying their freedoms and speaking out about human rights,” said John Dalhuisen.

On 29 June, 55 LGBTI activists were detained by police after they attempted to hold a peaceful demonstration in St. Petersburg to raise awareness of rising discrimination and violent homophobic attacks in Russia.

This was despite the fact that the organisers had informed the city authorities of the date and the purpose of the event, as prescribed by the law.

However, soon after the event started, police informed protesters that local authorities had received a complaint saying the meeting violated a ban on “propaganda of homosexuality” among minors, imposed by the municipal law in 2012. When the protesters refused to cease demonstrating and leave, police formed a line and kettled them towards police vehicles when the arrests were made.

The authorities later initiated administrative cases against those arrested for failure to abide by the lawful order of a law enforcement officer. Since then, all activists have been released. Public activities by LGBTI activists have been similarly prevented and disrupted in other parts of Russia.

LGBTI organisations, such as “Vyhod” (Coming Out) and the LGBTI film-reviews festival Bok o Bok (Side by Side), both based in St. Petersburg, have been targeted by the authorities. The organisation and their leaders were also fined under the so-called “foreign agents law”.

It requires any NGO that receives foreign support and engages in loosely defined “political activities” to register and as “an organisation performing the functions of a foreign agent” and mark all their public materials accordingly. Both these organisations have always rejected being defined as “foreign agents”.

In addition to harassment by the authorities, vigilante groups openly targeting LGBTI people have emerged across Russia.

The authorities have failed to take action to protect the victims and prosecute those behind the attacks despite evidence film-reviewsed by the perpetrators, who posted the videos on the internet.