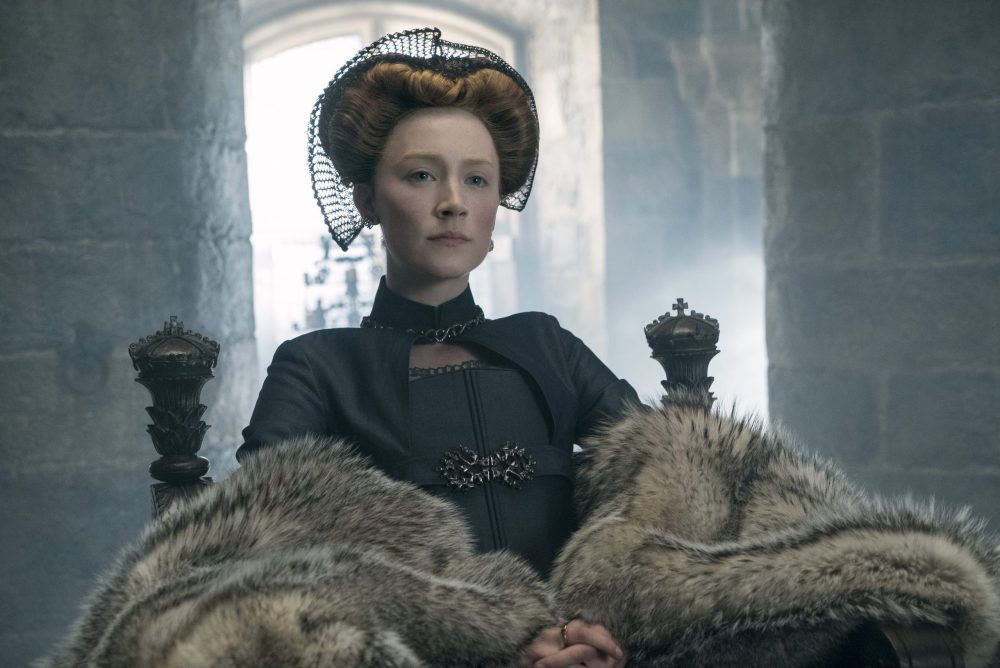 The bloody tale of Mary, Queen of Scots doesn’t have a happy ending in life or onscreen.

Saoirse Ronan and Margot Robbie vie for power in the latest period drama.

More roles for women in film, directed by women. More positions of power for women, and supported by other women. That’s what we would like to see, but the history of both filmmaking and politics tells us this is not easily achieved.  But there is a lesson to take away from her story.

The feature film Mary Queen of Scots explores the tragic life of the strong and somewhat stubborn Mary Stuart (Saoirse Ronan) and her fraught long-distance relationship with her competitive cousin, Elizabeth I (Margot Robbie).

The story has been told twice before in commercial cinema: in 1936 with Katharine Hepburn as Mary and in 1971 with Vanessa Redgrave as Mary.

The basic plot goes like this: Mary is seen by Elizabeth as a threat to her crown and when she refuses to marry the man of Elizabeth’s choice, instead marrying the handsome (but queer) Lord Darnley, the two women become estranged.

When Darnley and Mary produce an heir, James, who is expected to eventually succeed the childless Elizabeth, the British Protestant queen becomes even more certain of losing her crown to the Catholics.

As a preemptive strike by the English court, Darnley is assassinated and Mary is imprisoned for 18 years, then ordered by Elizabeth to be executed after refusing to relinquish her throne—and after numerous alleged plots against the English monarch are uncovered.

The two queens, who had an epistolary relationship and communicated via letter and through lieges never met in real life and one wonders if history might have turned out differently if they had met face to face as women, setting aside their opposing ideologies and abilities, and become allies. But as women beholden to patriarchal power structures their view of each other is cursed, each seeing the other as an enemy rather than as a friend.

This version of Mary Queen of Scots, directed by Josie Rourke, softens that view slightly to tempt us with a slim hope of friendship but that is dashed when Mary’s fertility makes her a far more valuable commodity than Elizabeth; and when Mary’s favorite courtier, the genderqueer Rizzio, is murdered before her eyes at the behest of the alcoholic Darnley, the Scottish queen sticks even harder to her moral codes.

Nevertheless, in a theatrical scene set in an abandoned cottage hung with sheets, Mary and Elizabeth do meet but their bond is obscured by too many layers of intrigue and obfuscation—as symbolized by the fabric that separates them. Written by Beau Willimon, who gave us the character of Claire Underwood in House of Cards, Mary Queen of Scots examines the pitfalls of female power in a system that wasn’t made by or for them.

The men surrounding both women prove to be unreliable and untrustworthy, both as mates and as compatriots. Mary and Elizabeth admire each other from afar and are curious about each other, but their blood ties are sundered by duty, faith, and the necessary consolidation of state.

Mary, as portrayed by Saoirse Ronan, is passionate, proud, curious about life. Margot Robbie’s Elizabeth, on the other hand, is rigid and frustrated. Scarred by a devastating case of the pox and unable to find a suitable male mate she grows to hate her more free-living cousin. While Robbie makes an imposing queen, her natural athleticism and bearing are atrophied inside stunning costumes designed by Alexandra Byrne and her face is a terrifying white mask completely devoid of emotion other than doubt and rage.

But this is Ronan’s film and her performance is stellar. Far from being merely a villain or a rebel, her Mary is an independent woman full of life whose belief system is more aligned to women of today. The scene in which her favorite, Rizzio, comes out wearing drag and she warmly welcomes him into her chamber is one example. Rourke and Willimon also avoid a heteronormative, whitewashed version of history by including people of color and diverse sexuality in the depiction of court life helping to make this film an engaging period drama.

Even though the character of Elizabeth (who most historians consider the greatest and most effective English monarch) is reduced to a bitter nutcase it’s worth seeing for the luminous performance by Ronan and the message that when women seek to win by competing with each other for power, men win in the end.