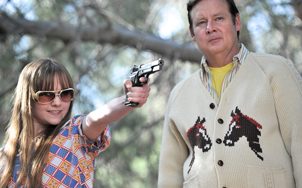 After wowing the audiences at Toronto Film Festival, God Bless America is set to take movie goers by storm!

Do reality stars annoy the hell out of you?

Had enough of talent shows?

The right brand of mobile and the right car – is EVERYTHING in life? Only the young and beautiful are important (well think again)

Taboo-busting filmmaker and comedian Bobcat Goldthwaite returns with an hilarious black comedy, God Bless America that follows a modern day Bonnie and Clyde as they eliminate some of society’s most obnoxious, self absorbed, JERKS, one at a time! Starring Joel Murray (think Bill) and newcomer Tara Lynne Barr, this film is certain to tickle your funny bone