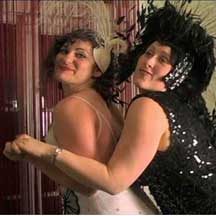 Season two of here!’s Lesbian Sex & Sexuality picks up where season one left off and goes even deeper.

Good news, ladies: You can put your plans for lesbian bed death on hold, because things are about to get H.O.T. The premium LGBT network here! has begun airing season two of its ground breaking series, Lesbian Sex & Sexuality. The documentary series, created by award-winning producer Katherine Linton, frankly explores a topic that all too rarely receives in-depth coverage: the way women who love women, well, love.

Author and Sirius radio host Diana Cage returns to impart more of her sexy and hilarious commentary along with a new lesbian sexpert, Grace Moon, founder of Velvet Park and managing editor of Our Chart. They are joined by celesbian guest stars Guinevere Turner, Kate Clinton, Michelle Wolfe and more.

While the subject matter might be a bit different, the sexiness factor is still dialed up to 11. “I think kick-ass girls are hot. Period. And we don’t see enough of it in the media…We look for it in these underground kind of subculture places—burlesque, jello wrestling, roller derby, oil wrestling,” said Moon, commenting on episode one, “Lesbian Camp.”

In the third episode, “Sex On the Sleeve,” Linton and crew delve into lesbian fashion and discover how queer women use their choice of clothing, not only as a form of self expression, but as lady bait. “We really wanted this season to dispel certain myths about lesbians, and one myth is we don’t have any fashion sense or care what we wear,” explained Linton. “That is not at all true, and how lesbians choose to dress says a lot about not only how they see themselves and want the world to see them, but also about who they want to attract.”

Episode three also illustrates how lesbian fashion has infiltrated popular culture. Grace Moon is quick to point out the effect our aesthetic has had on mainstream haircuts, saying, “You know I’ve seen more fauxhawks on guys than ever before, and we started that trend. Please. The fauxhawk is ours.”

In addition to its entertainment value, this series fills a very important role, promoting lesbian visibility, a responsibility Linton is all too aware of. “Love it or hate it, if The L-Word really is over, then [we’ve] lost our one series with such high visibility. We have come a long way, but I still think we need more venues, and, frankly, money behind us to make sure our images are seen in honesty and in numbers,” she said.

If that isn’t enough to convince you to set your TiVo for a season pass, you have to at least tune in to see lesbian sex expert Midori explain how a tic-tac in a zip lock baggie can boost your sex life. Now that’s what I call must-see queer TV!