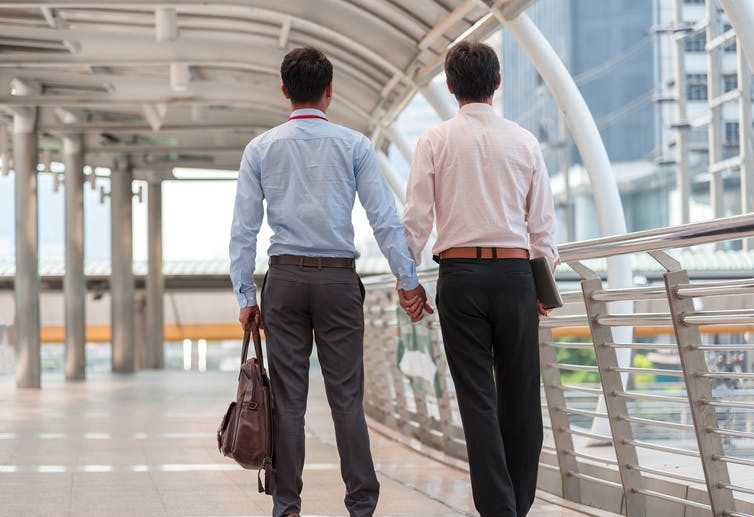 For employees who identify as LGBTQ, and work in one of at least 17 states nationwide that fail to protect workers, the answer at best is uncertain. At worst, it’s “no” under state statute.

Are you fully protected from employment discrimination?

For employees who identify as LGBTQ, and work in one of at least 17 states nationwide that fail to protect workers, the answer at best is uncertain. At worst, it’s “no” under state statute.

One of my areas of research is employment discrimination. In an article to be published this fall, I examined the characteristics of states which have adopted legislation protecting LGBTQ employees from discrimination.

In many ways, the patchwork pattern of state-level protection from discrimination for LGBTQ employees is similar to states which allowed same-gender marriage before 2015.

Because federal law does not specifically protect LGBTQ employees from discrimination, some argue that it is legal to harass and even fire an employee just for “coming out” on the job.

In fact, on Aug. 16, the Trump administration filed a written brief with the Supreme Court arguing that federal law does not protect transgender employees from discrimination. The Supreme Court will decided by 2020 whether sexual orientation and gender identity are covered under federal employment discrimination law.

Early studies indicate that discrimination against LGBTQ employees, up to and including loss of employment, is prevalent in the U.S.

The associated loss of workplace productivity due to discrimination against LGBTQ employees is estimated at US$229.3 billion annually, due to absenteeism, turnover and costs related to stress.

I wanted to know if the characteristics of these states that were early supporters of marriage equality were similar to states that have been early adopters of legislation protecting LGBTQ workers.

In my study, I looked at the 2010 census for the geographic, social and economic characteristics of all 50 states.

I compared these independent variables to each state’s employment protections for LGBTQ workers. In some states, protection from discrimination only applied to public employees.

In other states, the law covers all employees. Some states offer protection from discrimination based only on sexual orientation, but not gender identity.

I used statistical modeling to understand what made a state more likely to adopt laws protecting LGBTQ employees from discrimination.

States in the Northeast region of the U.S. were 92% more likely than states in the Midwest to adopt statutory protections from employment discrimination based on sexual orientation and gender identity. States in the South were least likely to have adopted such legislation.

I also found that the size of the urban population in a state predicted its likelihood to adopt protections for LGBTQ workers from discrimination.

When the urban population of a state increased by 1%, the state was nearly 10% more likely to adopt legislation protecting LGBTQ employees.

Another interesting study result was based on a nationwide index of religiosity, taken from the 2014 Religious Landscape Study conducted by the Pew Research Center.

Higher rates of religious practice by a state’s residents, like those of Alabama and South Carolina, was the only variable that I studied which decreased the likelihood of a state to adopt legislation that protected LGBTQ employees from discrimination. This finding echoes other research of pro-LGBTQ legislation.

I am currently surveying members of the LGBTQ community to better understand the employment and related experiences of this community nationwide.

Charges of discrimination are regulated by federal law. However, workers may also pursue legal action under state law, which is why state protections are important.

In 2012 and 2015, the Equal Employment Opportunity Commission issued administrative rulings to enforce federal law and accept charges of discrimination by LGBTQ employees under the protected class of “sex.”

This Circuit Court split is intriguing, given my study’s finding of the role of a state’s geographic location in predicting its likelihood to adopt protections for LGBTQ employees. Currently, most LGBTQ workers in the South and Midwest regions have little to no state protections from employment discrimination.

The Supreme Court will decide the consolidated cases of discrimination, brought by LGBTQ employees under the protected class of “sex” during its upcoming term.

There was substantial evidence in my study that there is less political conflict over this LGBTQ issue compared to marriage equality. I hope to see the Supreme Court defer to the EEOC’s practice on this issue. All employees deserve a safe workplace.