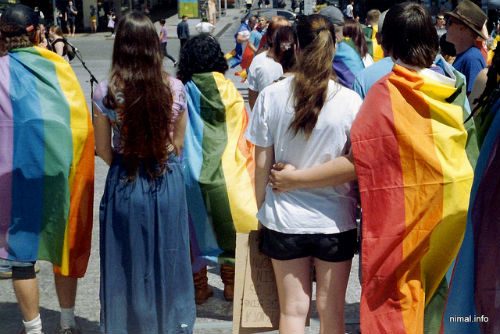 The Williams Institute at the UCLA School of Law and the Columbia Law School Clinic press for marriage equality and predict economic boom in .

It seems that the fight for marriage equality is finally finding its place in the sun and is starting to thrive. More and more studies and court briefings are being conducted, finding new data supporting gay and lesbian marriage in the U.S. and its positive economic effects.

Both the Williams Institute at the UCLA School of Law and the Columbia Law School Clinic, have recently contributed their findings to the fight for equality and LGBT rights, revealing that both Virginia and Utah will see economic boosts in the upward millions if the states extend the freedom to marry to lesbian and gay couples.

The Virginia study found that by extending marriage to lesbian and gay couples, the state would generate up to $60 million in revenue, meaning that not only is the freedom to marry the right thing to do, it is also the smart and economic thing as well.

According to 2010 U.S. Census, the most recent data available, 14,244 same-sex couples live in Virginia. Of those couples, the Williams Institute estimates that 50 percent (7,122 couples) would choose to marry in the first three years, a pattern that has been observed in Massachusetts and elsewhere. Nearly 5,000 marriages would occur in the first year alone, and bring up to $38 million in revenue to the state of Virginia that year.

Some other key findings of the study were: Direct spending by resident same-sex couples on their weddings would add an estimated $39 million to $50 million to the state and local economy over the first three years.

Wedding-related spending and tourism would generate approximately 459 to 595 new jobs in Virginia over the first three years.

The Williams Institute also found that Utah could add up to $15.5 Million to its state economy and $1 million in state and local tax revenue. According to the 2010 U.S. Census, the most recent data available, 3,909 same-sex couples live in Utah. Of those couples, the Institute estimates that 50% (1,955 couples) would choose to marry in the first three years, a pattern that has been observed in Massachusetts and elsewhere. An estimated 1,251 marriages would occur in the first year alone, and bring an estimated $10 million in revenue to the state of Utah that year.

Wedding-related spending and tourism would generate approximately 268 new jobs in Utah over the first three years.

Yet finances aren’t the only focus. The Columbia Law School Clinic is pressing for marriage equality in Virginia as well, on the grounds that Virginia is violating the U.S. Constitution’s Due Process Guarantee by excluding gay couples from marriage.

Virginia’s ban on marriage for lesbian and gay couples violates the U.S Constitution’s due process guarantee, which protects against government interference in fundamental personal decision making, including the choice of one’s spouse, argues the Columbia Law School Sexuality and Gender Law Clinic in an amicus brief filed April 18th, 2014 with the U.S. Court of Appeals for the Fourth Circuit.

Columbia Law School Professor Suzanne B. Goldberg, who directs the Sexuality and Gender Law Clinic and is a leading expert on civil rights and constitutional law, is the brief’s primary author. The brief supports the claims of thousands of same-sex couples from Virginia, including Timothy Bostic and Tony London, and Carol Schall and Mary Townley, unmarried couples who each have been together for more than twenty years. (The case is Bostic v. Shaefer.)  Two other couples who brought a separate class action on behalf of all same-sex couples in Virginia have been allowed by the Fourth Circuit to intervene in the Bostic appeal. These intervening couples represent all same-sex couples in Virginia who are either prevented from marrying in the state or whose legal marriages in other states are not recognized by Virginia. Many of the couples, including some of the named plaintiffs in both cases, are raising children together.

The magnitude of the positive response that LGBT marriage equality has been receiving can be compared to the excitement of an open-air music concert. The stadium is packed all the way back to the risers in the balcony. It’s dark enough to see the stars, the stage glows as the band plays your favorite song, and all around you people are raising their lighters or their phones, swaying in solidarity. It’s that human connection of a shared love, of coming together over the same band, the same cause, and knowing that you’re one among many who believe in the same thing. Just as each light is a representation of that person’s love and approval of the music being played, the same can be said for each court briefing, each protest, and each study that finds marriage to be a freedom all should be able to hold.