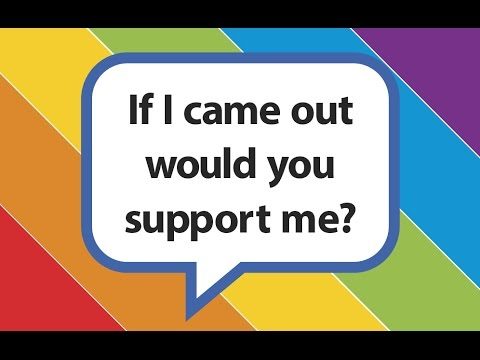 At 27 years old, Tybee Diskin started writing a letter to her parents. Almost a year earlier, she realized after years of identifying as a straight woman, that she was not, in fact, straight.

She spent that year exploring, decided that the term “bisexual” felt right for her, and was ready to come out to her parents.

Because she knew her father was most comfortable expressing his emotions in writing, she decided to meet him on his turf — through an email. Her mother had gotten bits of information along Tybee’s journey, but Tybee had yet to actually say the words, “I’m bisexual,” to either of her parents. She was finally ready to share, and though she knew they’d be accepting, she was still unsure how her parents might be affected by the news. At the very least, she figured they’d ask questions.

“I’d like to take the time to respond to this with some grace. I love you,” her father responded. A day or two later, he called, and they talked about it a little more. For the most part, however, Tybee was surprised to find that her parents were mostly unfazed; they simply accepted it and moved on. She actually felt the need to sit them down for more, recalling, “I sort of freaked out at my mom one night a few months after I’d sent the email. I said, ‘Why haven’t any of you asked me anything? I need to talk about it! You were so supportive that you didn’t even ask how I felt!!’ It wasn’t my best moment, but she responded beautifully. She poured me a glass of wine and started asking questions. I cried. We laughed. It was lovely.”

Overall, Tybee’s coming out experience to her parents was relatively easy. But when she heard one of her friends tell her coming out story, Tybee couldn’t stop thinking about how vastly different it was from her own; it involved a type of painful experience that Tybee had never even imagined, and it really stuck with her.

So Tybee decided to ask her other queer friends (and some strangers on Twitter) about their coming out experiences. She knew it wasn’t always what’s portrayed on TV or in movies, but she was surprised to find out just how tragic, hilarious, or even wonderfully simple each person’s story could be. Everyone’s coming out experience was unique — when they came out, who they came out to, and how they did it. It isn’t a “one-and-done” thing, either; queer people come out over and over to new people throughout their lives, and some of the stories reflected those experiences, as well. That’s when inspiration sparked, and Tybee made it her goal to showcase that there was no singular “queer experience.”

Tybee, a Creative Producer at the mobile entertainment studio Mammoth Media, decided to use its short-form storytelling app Yarn as a platform to share these stories. Yarn’s audience mainly consists of 18-to-25 year olds, which can be a particularly vulnerable age in a queer person’s life, and hoped that these stories would resonate with Yarn’s viewers. After helping her friends adapt a few stories into the Yarn’s chat fiction format, the “Coming Out” mobile series was born.

“Coming Out” on Yarn features 9 real, personal conversations that range from heartwarming acceptances, playful banter, to difficult losses. It was important for Tybee to feature a variety of voices from the community as well: bisexual, asexual, nonbinary, transgender and more. As the series progresses, viewers gain a first-hand perspective of how these conversations unfold, and it becomes increasingly clear that the path to coming out and what it means to be queer is unique for everyone.

While LGBT+ representation in entertainment is still lacking, Tybee believes the industry is slowly moving in the right direction. Steven Universe and Schitt’s Creek are particular standouts to her because they’re just about people — falling in love, struggling with confidence, learning, and growing. Stories that center queer characters don’t always have to be so heavy and traumatic. “Just show me a human moving through the world, expressing themselves freely and loving deeply,” says Tybee. “That’s the kind of story I want to see, and the kind I want to make. Something that explores what it is to be human, through the lens of being queer. I hope Coming Out will only be the first step.”