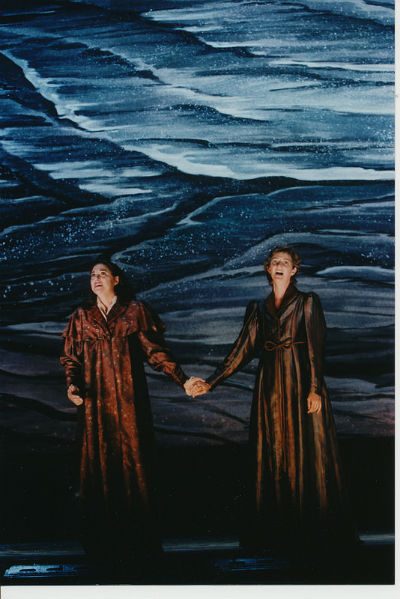 This opera is the first to portray an openly romantic relationship between two women.

Returning to New York after 18 years, the opera Patience & Sarah will be performed as a staged concert to coincide with NYC’s Pride Week.

Showing for two nights only at the Players Theatre, this opera is based on the Stonewall Award-winning novel of the same title by Isabel Miller.

Patience & Sarah tells the story of two 19th-century women who took a brave step against the social norms in pursuit of a dream of love, independence and a life together. Based in Connecticut, the performance follows the story of young artist Patience White and her lover, the bright and adventurous Sarah Dowling.

The opera began in 1981, when a singer mentioned to librettist Wende Persons that she had trouble identify with the straight characters she portrayed.

Persons was inspired to draft her debut opera libretto, based on Isabel Miller’s book. The actual narrative is based on the true story of painter Mary Ann Willson, who lived with her companion Miss Brundage as a ‘farmerette’ in the early 19th century in Green County, New York.

The story touches on relevant issues of gender expression and the limited opportunities for women, which created a strong following beyond the traditional circle of opera-goers.

In 1989, Persons’ libretto made its way into the hands of composer Paula Kimper. Her score is full of romantic arias and theme-driven musical storytelling.

Kimper says that the opera “features heroic women as leading characters, as portrayed in many of my operas. It combines my love for beautiful melodies with a romantic story. Working in a large-scale opera format reflects my aspirations as a female musician and composer in a traditionally male-dominated world. Growing up, I was told ‘girls don’t play the trumpet,’ but I did it anyway and was one of a handful. I am pleased to see significant numbers of women making music today, and I think the new generation of female artists should feel entitled to equality.”

The production features a new seven-piece orchestration for staged concert performances and has been hailed as “a rare and moving opera about women in love” by New York Magazine. Nadia Petrella will appear as Patience while Elsa Quéron will play Sarah.