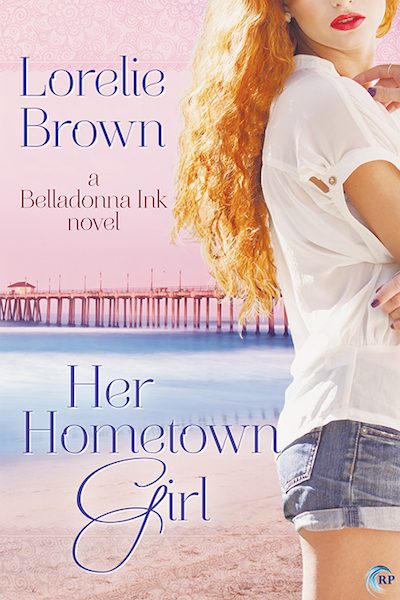 A runaway bride falls for her tattoo artist.

It’s Tansy Gavin’s wedding day. But instead of celebrating a new marriage, she’s getting a tattoo that’s patterned with all the lace that should have been on her dress and wasn’t. It’s the first step of many of wresting her life back from her controlling former fiancee after walking in on her bride-to-be having sex with one of the young men from the catering staff.

Tansy may not be ready for another relationship, but she’s definitely ready for a little fun. Her tattoo artist, Cai, is just what the doctor ordered. While Cai is 14 years older than her and avoids talking about anything personal, she knows how to have a good time and makes Tansy start to feel like there’s more to life than all of the things Jody had told her. Their friendship gives Tansy what she needs to move on and rebuild herself, including booking her first trip back to Idaho in years. For reasons Tansy doesn’t even know, she can’t help but ask Cai to come along.

Tansy and Cai each go through an impressive emotional journey from the beginning of the book to the end. It’s very quickly apparent that Tansy’s relationship with Jody was toxic and abusive, which informs even the way she reads situations. Cai, on the other hand, is incredibly guarded and reluctant to put herself out there because she carries her own burdens. Their chemistry is fabulous, making it easy to see their attraction and connection. Their road to romance is far from easy, however, since they each need to learn how to let the other in, and in ways that we don’t always see in lesbian romance because they’re informed by trauma.

When I saw that the book would feature a runaway bride dating a tattoo artist, I was excited and knew I had to read it. And when I figured out that there’s an age gap between Cai and Tansy, I was even more excited because I always love seeing that in lesfic stories. I had no idea that the book would be so much more, though, because the blurb just hints at some of the other themes that lay within it. Lorelie Brown made a brave choice in tackling abuse in lesbian relationships and showing the effects that can last long after the relationship is over. At times it’s heavy and uncomfortable, whether in the brief moments that we see Jody and Tansy together, or when we get a front row seat to Tansy’s thought processes that have clearly been shaped by years of interactions with Jody. However, none of it is gratuitous, and hopefully it will give readers in a similar situation something that they can recognize and use to reach out for help.

Her Hometown Girl is the third book in Lorelie Brown’s Belladonna Ink series, featuring characters that are all tied to the same tattoo shop in California. It fully stands alone, however, following a new couple with only brief mentions of characters from Far From Home and Take Me Home. While the subject matter is sometimes difficult, the romance is beautiful and satisfying with just the right amount of angst, making this a worthwhile read that I wholeheartedly recommend.

Tara Scott is a regular reviewer at The Lesbian Review and you can hear her talk about lesbian fiction on her podcast Les Do Books.