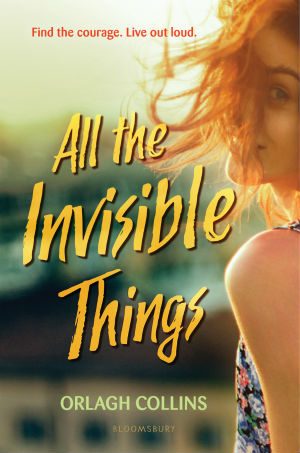 A warm, witty, important story about being a young woman today and what it’s like to find a real connection amid all the noise. Perfect for fans of Holly Bourne and Laura Steven’s The Exact Opposite of Okay.

I can’t get it out of my head. I picture Pez’s face as I left his room yesterday, only I’m not sure what I see looks like him any more. The eyes are too hard and the face more severe. I don’t know why I feel so unsettled by it. It’s honestly not about March or how pretty she is and how nice her clothes are. It’s not the photos she sent him either. Yeah, it was surprising to hear about those, but really, so what? I guess I’d assumed Pez and me would always be on the same level. Like, experience- wise. Naively it seems, because it turns out he’s bolted off down the track before I knew the race had begun.

I need to get out the door to work, but my third attempt at a messy bun still isn’t right. Arial is watching, so I yank a few strands loose then do a twirl in the mirror, smoothing my T-shirt down over my leggings. “Okay,” I say. “How do I look?”

She’s rifling through a toiletry bag. “Sexy,” she says, twisting up an old lipstick and examining the color.

“Sexy isn’t quite what I was going for. Or what you should think I’m going for,” I say.

“Whatever,” she says, cocking her head like a dog and giving me that evaluating look she’s taken to dishing out. I’m already falling short of her expectations, I can tell. “You’ll need some of this,” she says, handing me the lipstick, which I can see is a fetching frosted pink. “It’s waitressy.”

She says it with such certainty. “Is that right?”

“Hundred percent,” she says. I pretend to put it on, but she keeps watching, awaiting my transformation. “Go on,” she says.

I begin painting my lips for her amusement, half hating myself and half enjoying it too. I look ridiculous, but what harm? I’ll wipe it off on the way. “C’mon, grab your backpack,” I say, but she’s still eyeing me up, trying to decide whether I’ll do. “Arial, we need to go!”

I reach Clementine’s two minutes early and bask in a shaft of sunlight, taking in all its loveliness from outside. The orange paint bursts forth, so bright and juicy and sure of itself. Earlier rain has left drops on the sign and these glitter in the light like tiny jewels. The sandwich board outside is covered in swirly writing that’s tricky to read but someone has drawn flowers all down the side and it looks cheery. Through the window I see enough bodies to know it’s busy, so I quickly check my hair then step into the soft, welcoming noise. I make my way to the counter, taking in the shiny square tables with matching silver chairs and tiny white vases with daisylike flowers in the center. The coffee machine steams and chugs alongside the hum of customers” chatter and the old-school R & B that plays in the background— the kind Wendy and Fran are into. I don’t know how I didn’t notice these details yesterday, but I’ve got a powerful sense that this is a place I could be happy.

Clementine pops up from under the glass almost on cue. “You’re here!” she says. “Nip around the back and grab yourself an apron. Then come help me label these baguettes.”

I’m tempted to salute like a soldier, but of course, I don’t. She’d think I’m nuts and that could ruin everything, so I dash toward the back of the café, quick as I can. I push through the door and step into a brightly lit room, delighted at the prospect of a staffroom and overjoyed with the fact I’ve landed such a proper job. There, on a chair, directly under the bright striplight, sits March.

March! The same March who texted Pez her bits is casually punching words into her phone like there’s not one remotely unusual thing about her being there. I think about trying my entrance again. Maybe this is some surreal game of life roulette and if I put all my money on red and try walking in once more, someone else—Beyoncé, Jesus, anyone else, please—might be sitting in the chair next time around.

She looks up. “Alright,” she says, low and slow.

Um, hello! I want to say. What are you doing here at my new job? She stands and slips her phone into her pocket. She’s wearing high-waisted jeans and a plain black T-shirt that’s tied in a knot to the side. A stripe of her brown skin is visible between the two and her curves fill every inch of her clothes, but instead of just taking all this in and moving on like a normal person, my brain keeps shouting Pez has seen her boobs. Pez has seen her boobs!!!! I feel like a ten-year- old.

“Mum mentioned she’d hired someone called Vetty. I wondered whether it was you. Can’t imagine there are many of you out there.”

Her mum! I take my backpack off, trying hard not to look bothered, but truly, the thought of having to deal with that face and all the madness it brings for the rest of the summer, is making my head hurt. Clementine being March’s mum just makes this reality sharper and makes March more . . . permanent. Only five minutes ago life looked so joyful and bright but a huge curly-haired cloud has eclipsed my sun.

I catch a glimpse of myself in a tiny mirror above the coat hook behind her head. It takes a few seconds for me to connect the pink lipstick I’m seeing with my own mouth, then I swipe at my lips, until all traces of sparkle are gone. She’s watching me, smiling. I do my best to cover. “Where do I find one of those?” I ask, pointing to the apron slung loose around her neck.

She opens a drawer and hands me a folded black square that’s been neatly ironed. “Here,” she says, staring at my lips, which I’m sure are red-raw. I shake the apron out, watching how she takes the strings of her own and loops them around her waist, and I copy how she pulls them to the front and ties them in a bow. Then she bends over and scoops all her hair up into an elastic band, leaving a pineapple- shaped stack of curls high upon her head. She doesn’t fiddle with it or even check it in the tiny mirror before she leaves the room.

I follow her out and cross the floor to the glass counter next to the till, where we perch together behind an array of sandwich fillings and giant bowls of salad. I’m telling my brain to behave and wondering whether I should be doing something useful, when March takes a small writing pad and a pen from her apron. “You’ll need these,” she says, holding out her hand. I take them and flick through the pages. Scratches of blue ink say things like 2 x cappuccinos—1 x STRONG—underlined a lot—and 1 x smoked salmon bagel (no cream cheese!!!)—hot chocolate—kid!!! It’s the handwriting from the sandwich board outside. I look up. “Don’t worry,” she says. “It’s not private.”

Private hadn’t crossed my mind but Clementine has arrived and is standing on the other side of March. While not exactly tall, March looks it beside her mum. Her skin is a shade darker than Pez’s, whereas Clementine is paler than me and her fair skin is covered in freckles.

“We do a lot of takeout over lunch,” Clementine says. “Best let March do the sandwich prep today. Watch as you wrap. You’ll learn a lot that way,”

“Sure,” I say, nodding away, like a bobblehead doll.

“Tomorrow we’ll show you how to take orders, and we’ll move on to the till after that. For now, just keep the tables clear and wiped down,” she says, dropping some plates in the sink. “Oh, and be nice to the customers.” She gives March a loaded wink. March returns the look in a way that makes it clear she’s been told to do this a lot, and as her mouth returns to how it was, I notice they share the same dimple on the left side of their cheeks.