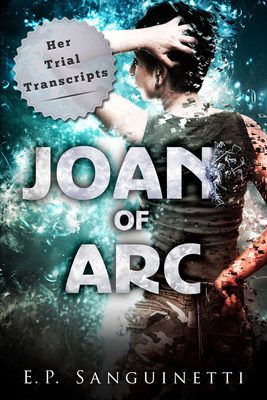 With the publication of Joan of Arc: Her Trial Transcripts, author E.P. Sanguinetti provides readers with a modern English translation which clearly presents evidence that one of the Church’s preeminent saints was likely a lesbian and transgender person.

“In this book, Joan of Arc’s trial transcripts were translated and edited solely for readability, and no attempt was made to use language or the editing process as a means to support or refute various opinions about the sexuality and gender identity of Joan of Arc,” said Sanguinetti.

Historians have criticized writers such as Vita Sackville-West (1892-1962) for implying Joan was a lesbian and cross-dresser (transgender). What has changed?

Sackville-West’s biography of Joan, Saint Joan of Arc, was published in 1936. Historians correctly noted that bedding was relatively scarce in the 15th century, and two women sleeping in the same bed cannot be construed as evidence of sexual intimacy.

Historians also addressed claims of cross-dressing by stating the need for Joan to protect herself from sexual assault in prison as well as the need to dress in men’s clothes during military operations. While both of those arguments are true, they neglect to address other evidence, which in its entirety, clearly makes it reasonable to conclude Joan was a lesbian and transgender person.

Sanguinetti’s book also provides readers with insights into the origin of Joan’s “voices,” which she claimed to provide divine inspiration not only for her military achievements but also for her extreme reluctance to wear women’s clothes. Of all the crimes that Joan of Arc was charged with during her trial, she was executed solely on the basis of only one of those crimes: wearing men’s clothes.

Here is an extract:

Was Joan of Arc a Lesbian?

Claims that Joan was a lesbian typically stem from two sections within the transcripts of her Condemnation Trial, which occurred in 1431, and her “Rehabilitation Trial” in 1455, when more than 100 witnesses gave additional testimony and the previous verdict was overturned.

In the Condemnation Trial, Joan appears to have taken the initiative in wanting to spend two nights in bed with Catherine de La Rochelle to see the lady-in-white, whom Catherine claimed to appear as an apparition. Testimony during the Rehabilitation Trial by Marguerite la Touroulde indicated the two women shared a bed nearly every day for three weeks. First, a note about the following segment of the Condemnation Trial transcripts of March 3:

Joan asked this Catherine if the lady-in-white who appeared to her came every night, saying that she would, to see her, sleep in the same bed with Catherine; and she went to bed with her and stayed up until midnight, but saw nothing, and then went to sleep.

In the morning, Joan asked Catherine whether the lady-in-white had come to her. Catherine replied that she had, while Joan was sleeping, but that she had not been able to awaken Joan.

Then Joan asked if the lady might not come another night, and Catherine answered yes; so Joan slept during the day, so that she might stay awake the whole night.

That night she stayed in the bed with Catherine and watched all night, but saw nothing. Throughout the night Joan often asked Catherine whether the lady-in-white would come, and Catherine answered, “Yes, soon!”

The text above is translated as faithfully as possible from the French. For readers comparing this translation to W.P. Barrett’s English translation of 1932, it’s important to note that Barrett’s translation is obfuscated to some degree. For example:

Barrett’s translation—and she slept with her, and watched till midnight, saw nothing, and went to sleep.

Sanguinetti’s translation—and she went to bed with her and stayed up until midnight, but saw nothing, and then went to sleep.

A second example regarding the use of exclamation marks:

These notes are important for some critics because English translations of the source material often muddle or omit text from Quicherat’s source. The following text is from the Rehabilitation Trial transcripts documenting the testimony of Marguerite la Touroulde, widow of Réné de Bouligny, advisor to the king:

She was in my house for three weeks, sleeping, eating, and drinking there. And almost every night I slept with Joan, and I never saw or noticed anything uncanny about her. But she behaved and continued to behave like an honest and Christian woman. She confessed very often, gladly heard the Mass, and often asked me to go to Matins; and at her request I did go and took her there several times.  (1)

Matins refers to Catholic liturgical prayers that end at dawn. The word Matins is derived from the Latin name for a Greek goddess Leucothea, white goddess, or goddess of the morning, also known as Aurora. (2) Although Catholic tradition eliminated any connection to the pagan origins of the word Matins—and nothing in the source text indicates otherwise—the white goddess is reminiscent of the lady-in-white, or white lady, referred to by Catherine de La Rochelle.

Regarding whether Joan had any non-orthodox beliefs or practices, according to Touroulde’s testimony, she and Joan spoke about non-canonical texts that Joan perceived to be sacred but were not recognized as such by the clerics who examined her at Poitiers. Joan, according to Touroulde, responded to some of the clerics’ questions by saying, “There is more in our Lord’s books than in yours.”  (1)

One unambiguously unorthodox practice of Joan involved her leadership of men, not only in the battlefield but also in religious practices. Jean de Dunois, affectionately known as “the Bastard of Orleans,” testified that Joan led, not merely participated in, the daily cyclical prayers that Catholics refer to as the Divine Office or the Liturgy of the Hours:

It was her habit every day, at Vesper time or at dusk, to retire into a church and have the bells rung for almost half an hour. Here she gathered the mendicant friars who followed the royal army, and at that hour she said her prayers and made these mendicant friars sing an anthem to the Blessed Virgin, the Mother of God.  (3)

Touroulde’s testimony is often used to support claims that Joan was a lesbian, and a disconcerting portion of her testimony is omitted in a popular English translation that is replicated numerous times on the web; the text that is omitted is the following:

I saw her several times in the bath and in the hot-room, and so far as I could see I believe that she was a virgin.  (1)

The Latin word stuphis may be translated as “steam bath” or alternately as a geologic thermal spring, such as a source of hot sulfur spring water. For readers interested in the location where the omitted text should appear in Touroulde’s testimony, the following material provides the context, with the omitted text in italics:

Jeanne was very liberal in almsgiving, and willingly succored the poor and indigent, saying that she had been sent for their consolation. And I saw her several times in the bath and in the hot-room, and so far as I could see I believe that she was a virgin. I have no doubt that she was virgin. According to my knowledge she was quite innocent, unless it be in warfare. She rode on horseback and handled the lance like the best of the knights, and the soldiers marveled.  (6)

Joan’s time in bed or in the baths with Marguerite la Touroulde or time in bed with Catherine de La Rochelle doesn’t provide conclusive evidence that Joan was a lesbian primarily because bedding was relatively scarce in the fifteenth century and it was not uncommon for women to share a bed. However, it is reasonable to ask why Touroulde would state, “so far as I could see I believe that she was a virgin.” That, too, isn’t conclusive because testimony from the Rehabilitation Trial revealed that Joan not only was examined on several occasions regarding her virginity, but she sometimes challenged others to inspect her if they didn’t believe it, so she may have offered to “prove” her virginity to Touroulde solely to establish the fact.

While individual historical facts are inadequate to make any definitive conclusions about Joan’s sexual orientation, when viewed in their entirety, it is reasonable to make the assertion that Joan was a lesbian, particularly in light of several statements made by Joan, which are assumed to be referring to the apparitions of Saint Catherine and Saint Margaret, but instead could be referring to Catherine de La Rochelle and Marguerite la Touroulde:

We asked whether she spoke to our Lord when she promised Him to keep her virginity, and she answered that it was quite enough to promise her virginity to those who were sent from Him, namely Saint Catherine and Saint Margaret.

This statement is problematic because shortly after Joan makes this assertion, she stated, “the first time she heard her Voice she vowed to keep her virginity as long as it would please God, and that she was 13 years old or about 13 years old at the time,” which is prior to the time she reports promising her virginity to Saint Catherine and Saint Margaret.

Asked why she so happily looked at this ring when she was going into battle, she answered that it was out of pleasure and in honor of her father and mother, and because, having her ring on her finger and in her hand, she touched Saint Catherine who appeared before her. Asked what part of Saint Catherine she had touched, she said, “You will get no answer from me.”