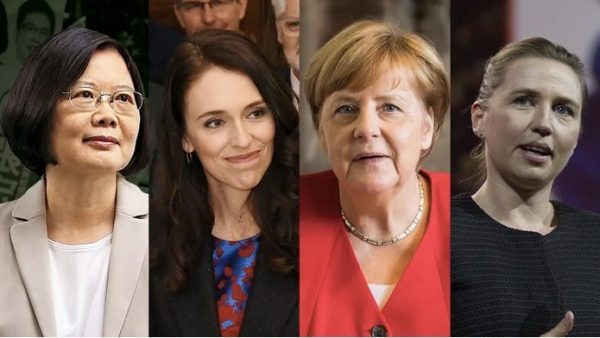 I wanted that woman president to be Hillary Clinton in 2016 because she’d been working for progressive causes—and for women—since she was an undergraduate at Wellesley College. With decades of public service on her resume, she was a smart, hard-working, seasoned politician. I would have liked her to be even further to the left, but as it was, she had the most progressive platform in American history.

Hillary’s platform is still available online, and I read it over periodically as I report on the 2020 primary because I want the women running for president now to surpass Hillary’s political acumen and expand on her plans for the nation’s future.

In addition to a platform filled with policy that centered on women, Hillary had also promised to give us an administration that looked more like America than any other administration ever had. Her staff had always been half women and 40 percent people of colour. For decades, Hillary’s top aides had all been women of colour. Her cabinet would have been representative of America for the first time in history. She was the first candidate to have an out gay campaign manager.

But we didn’t get Hillary Clinton’s presidency and the game-changer it would have been. Instead, we have the most misogynist presidency of our collective lifetimes, led by an accused rapist. That presidency is also virulently anti-LGBTQ.

Throughout 2019 alone, I have written dozens of news stories about the Trump administration’s attacks on women and LGBTQ people. It has been, frankly, harrowing.

Harrowing because it is a new normal that just keeps building on itself.

Many of those news stories have been about the relentless rollback of civil rights that were gained over long and incremental battles yet were overturned overnight by President Trump and his Justice Department, Education Department, and Health and Human Services Department.

In August, the Trump administration filed amicus briefs to the U.S. Supreme Court (SCOTUS) in three antidiscrimination cases brought by gay men, lesbians, and a trans woman. Those briefs, if considered, could set LGBTQ civil rights back decades. The Trump Department of Justice (DOJ) is demanding that the SCOTUS dismiss any lawsuits brought on the basis of Title VII of the 1964 Civil Rights Act. (The Obama administration had previously expanded Title VII to include protections for sexual orientation and gender identity.)

The same week Trump ordered that action by the DOJ, he also moved to broaden religious freedom laws to allow federal contractors to discriminate against LGBTQ employees—a move that could impact 420,000 workers. The new rule proposed in the Federal Register by the DOJ would allow any federal contractor to deny employment to and/or fire any employee who was LGBTQ, in deference to the contractor’s religious beliefs. Earlier in the spring Trump had already expanded religious freedom laws under Health and Human Services (HHS) to include medical providers who choose not to treat LGBTQ people.

Not since President Dwight D. Eisenhower’s Executive Order 10450, which led to a witch hunt that saw scores of lesbians and gay men investigated by the federal government and prompted the McCarthy hearings, have there been such terrorising orders against LGBTQ people from a president.

Trump’s attack on LGBTQ people is so extreme that it’s expanded to sheer pettiness. In June, Trump disallowed any American embassy from flying the rainbow flag in honor of Pride month, despite its being the 50th anniversary of the Stonewall Rebellion, where the modern queer civil rights movement began.

Concomitant with these recent actions by Trump and his administration, the Accelerating Acceptance Index found in June that Trump is making Americans less tolerant of LGBTQ people. According to the study, 39 percent would find it unsettling that their child was learning about LGBTQ history in school, compared to just 30 percent in 2018. And finding out that their doctor was LGBTQ made 34 percent uncomfortable, up from 27 percent in 2018.

Most surprising is that the least tolerant segment of the population is millennials—people 35 and under. These findings dovetail uncomfortably with FBI reports that hate crimes against LGBTQ people are up exponentially in just the past year.

The news gets worse: A study from The Trevor Project found that LGBTQ suicides are on the rise, while a different study from Brown University found that although selfharm is down among heterosexual teens and young adults, it is on the rise among LGBTQ people.

The profound effect Trump and his anti-LGBTQ administration is having on queer and trans people is endemic. The only way to stop Trump is by voting him out—and the November 2020 election feels very far away when every day brings a new and present danger for LGBTQ people.

Yet despite all of these studies and statistics and acts by the president and his administration, despite the fact that the first openly gay candidate, Pete Buttigieg, has been polling in the top five throughout the Democratic race, the primary has been virtually devoid of attention to either women’s issues or LGBTQ issues.

Sen. Kirsten Gillibrand (D-NY) raised both issues in the first two debates, but she withdrew from the race before the September debates when she failed to qualify in the polls. Gillibrand’s campaign was driven by issues that centered on women, issues like family leave, closing the pay gap, and abortion rights. She also had the best LGBTQ rights platform of any candidate, and has been a strong LGBTQ ally since before it was trendy for politicians.

Most of the remaining Democratic contenders—only 10 qualified for the September debates, including three of the remaining five women in the race—support LGBTQ rights and issues. Sen. Kamala Harris (DCA) was marrying lesbian and gay couples in San Francisco in 2004, when Mayor (now Governor) Gavin Newsom declared same-sex marriage legal after it was legalised in Massachusetts.

Harris regularly tweets about LGBTQ issues, and it was she who raised the issue of gay civil rights during the Senate confirmation hearings for Brett Kavanaugh. Harris asked the prospective Supreme Court justice if he viewed Obergefell v. Hodges as a landmark civil rights case. Kavanaugh refused to answer—which in itself was an answer.

But Harris’s attention to LGBTQ and women’s issues—like the crisis in black maternal healthcare—has barely been mentioned in the debates. Nor has Sen. Elizabeth Warren’s (D-MA) longtime advocacy for LGBTQ people, and her attention to women-centred legislation. Like Harris, Warren has a comprehensive platform on LGBTQ rights. Not one word of it has been mentioned in the debates. And Sen. Amy Klobuchar (D-MN) has made few inroads in the debates on either women’s issues or those that involve the LGBTQ community.

The remaining two women in the Democratic race are highly controversial candidates. Rep. Tulsi Gabbard (D-HI) has a long and deeply troubling history of virulent anti-LGBTQ activism, and one of the only questions about LGBTQ issues came in the first debate when she was asked about that history. While she was a state senator, Gabbard was staunchly anti-gay. Her father led a statewide fight against same-sex marriage through his organisation, Alliance for Traditional Marriage, which also supports conversion therapy.

Gabbard was an activist in her father’s campaign, which succeeded in passing a constitutional amendment banning same-sex marriage in Hawaii. As a member of the Hawaii House of Representatives, Gabbard declared, “As Democrats we should be representing the views of the people, not a small number of homosexual extremists.”

Gabbard also voted against help for LGBTQ teens, claiming none were being bullied in the schools. She objected to teaching students that homosexuality is “normal and natural” and said a pro-gay resolution would be “inviting homosexual-advocacy organisations into our schools to promote their agenda to our vulnerable youth.”

In Congress, Gabbard has claimed to have changed her stance on LGBTQ rights. But she has refused to meet with the Hawaiian LGBT Caucus. Yet, like nearly every Democrat in the House, Gabbard is a member of the Congressional LGBT Equality Caucus and supports the Equality Act.

During the first debate, Gabbard claimed she was “very young” when she was an anti-gay activist, implying she was a minor. No one contradicted her narrative, or even stated that she was already a state legislator when she held these views and voted on them, actively harming LGBTQ people. Gabbard is running on her record as a soldier, but has never mentioned Trump’s ban on trans people in the military, or any other actions Trump has taken against queer and trans people in either debate.

Spiritual guru Marianne Williamson was a friend to people with HIV/ AIDS back when it was a rarity for straight people. She founded Project Angel Food in 1989 to deliver food and provide other services, like hospice care, to those with terminal illnesses. Most of those the organisation served were suffering from HIV/AIDS. But while this was a huge benefit to people with HIV/AIDS, Williamson also has a history of telling AIDS patients that “sickness is an illusion.”

Will any of these women be able to break the choke hold that men have on the presidency? It’s certainly possible. Warren has the second-largest amount of money raised and has steadily risen in the polls to be in a dead heat with Joe Biden and Bernie Sanders, both of whom have run before and have 100 percent name recognition, as well as an established voting base.

Harris has had a more complex time in the primary, rising and falling and plateauing in the polls; as a black woman, she has faced more scrutiny for her role as a former prosecutor than have others in the race. Nevertheless, she has remained a steady fourth behind Biden, Sanders, and Warren, and has an undeniable charisma on the campaign trail.

The centrist Klobuchar, who holds the Senate record for most legislation passed, has been well received on the campaign trail, but has failed to break out in the debates or rise past the low, second-tier position she shares with Buttigieg, Sen. Cory Booker (D-NY), and former Texas representative Beto O’Rourke.

Representation matters. When Hillary Clinton ran for president, she refused to ignore women and the LGBTQ community, despite mainstream media claims that she was running on “identity politics.” Harris has used that term and refuted it in her campaign speeches. She’s said, “The phrase ‘identity politics’ is often used to either marginalise the topic of discussion or to shut people up. Not anymore. Where America stands on these issues is about America’s identity.”

I want a woman president. I want a president who knows that my identity as a woman should never be marginalised because she shares that identity, a woman who not only respects my identity as a lesbian but will fight for my civil rights. As the 100th anniversary of the 19th Amendment looms in August 2020, I hope that a woman can win the nomination, win the general election, and set the U.S. back on a course toward equality and justice for all—especially for those of us who have been denied equality and justice throughout American history.