While the country has been immersed in The Donald Trump Show and other, seemingly less important aspects of the endless primary season like the fact we are a breath (and a mere 144 delegates) away from the possibility of our first woman president, the GOP is attempting to restrict the lives of LGBT people in state after municipality after state.

Let me begin by arguing that this is why we need a strong Democratic Party and we need to continue to have a strong Democratic leader, but that should be, by now, a given. In state after state it is Republican governors and legislatures that are devising new laws every day to restrict the lives of LGBT people and women.

At the center of the current firestorm over anti-LGBT legislation is North Carolina, although that state is far from the only one we should be concerned about. Just last month Mississippi passed the most restrictive anti-gay law in the nation, Tennessee is poised to do the same and other states and municipalities are either proposing similar laws or, as happened in Houston last fall, have already passed them. In North Carolina, the city of Charlotte passed an anti-discrimination ordinance protecting LGBT people. That prompted the legislature to rush a bill through in 48 hours on March 23 in a special session to vitiate that ordinance and cover the entire state.

HB 2, the Public Facilities Privacy & Security Act, is many faceted, but news stories have focused on the law’s requirement that transgender people use public restrooms according to the biological sex on their birth certificate. It also bars local governments from passing anti-discrimination ordinances. 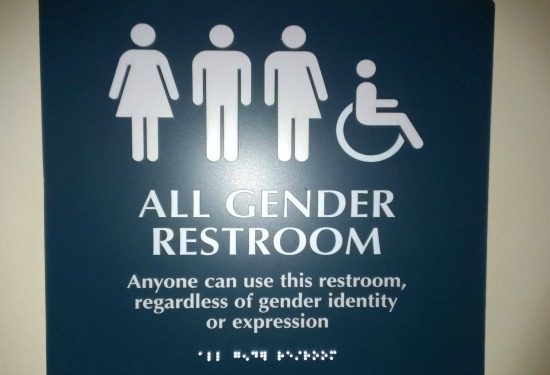 Getting less media attention is the fact that the North Carolina law, like the Mississippi law, puts all LGBT people at risk by removing all employment protections. HB 2 disallows North Carolina workers from suing employers under a state anti-discrimination law, which has been in place for more than 30 years. HB 2 stipulates that “[No] person may bring any civil action based upon the public policy expressed herein.” 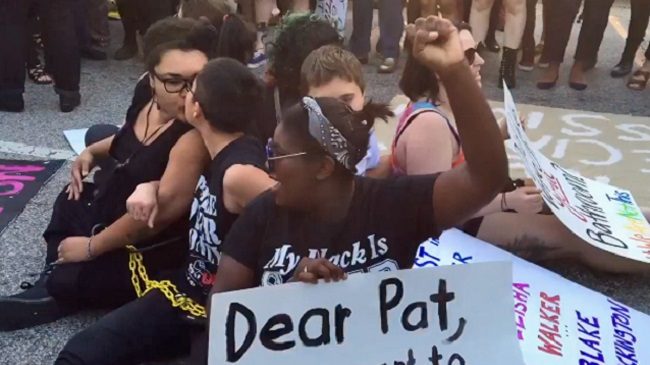 So HB 2 doesn’t just harm LGBT people – it provided cover to allow the state to undermine workers – women, people of color, Muslims, Jews, LGBT people – who feel they have been discriminated against.

These anti-LGBT laws are being pushed through state legislatures by pivoting off transgender issues, then incorporating further discrimination and spreading it around.

We are the victims of those laws.

In Houston, that meme worked. The fight against the broad-based anti-discrimination law reduced HERO to “the law that will put grown men in the bathroom with your little girl.” 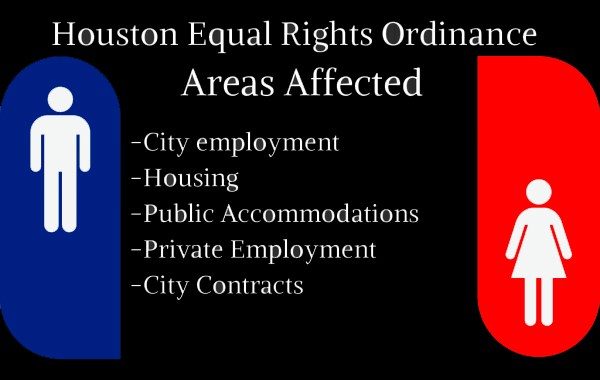 HERO went down in a massive defeat. And LGBT people were once again shafted by a well-orchestrated extremist conservative lobby determined to keep LGBT people separate and unequal. Few people even knew the breadth of the HERO–all they knew was the meme pushed by the far right. Grown men stalking little girls. Houston’s then-Mayor, Annise Parker, an out lesbian, had promoted HERO and pushed it through City Council, only to be sued by clergy and other right wing extremists to get HERO overturned. That hate and fear campaign worked. And LGBT people, as well as other vulnerable marginalized groups, bore the impact.

In the current primary season only one candidate has spoken out on these issues – Hillary Clinton – although Donald Trump said a few weeks back that Caitlyn Jenner could use the ladies room at his hotel in Manhattan and Jenner joked that she had found herself in Midtown and took him up on it.

Yet in terms of the actual civil rights involved, Clinton is the only one who has stated unequivocally that there’s no place for these laws and commented repeatedly on trans issues.

Last week, after watching a video by Pearl Love, a Taiwanese trans woman who was verbally assaulted on the subway in New York City, Clinton posted this on FaceBook:

But from within the Obama Administration has emerged a champion for LGBT people in Attorney General Loretta Lynch. Lynch brought me and so many other LGBT people to tears with her May 9 speech about these oppressive and repressive laws. She likened North Carolina’s restrictive laws to Jim Crow laws and filed suit against the state and Republican Gov. Pat McCrory.

For some time I have said the increasing number of new laws oppressing and repressing LGBT people have the taint of Jim Crow. If there are laws that allow one group of people to discriminate freely against another group of people, what else would you call those laws?

Lynch, the attorney for the people – all the people – was succinct. In filing a civil rights action for LGBT people she did something that has never been done before in American history. Yet it barely made news outside the LGBT community.

A lawsuit for our civil rights. Filed by the black attorney general.

How dare anyone say Democrats and the Republicans are interchangeable?

The current spate of anti-LGBT laws focus on a myriad of issues, but the one that gets attention is what, as was the case in Houston, have come to be known as “The Bathroom Laws.” These – as is the case now in North Carolina as well as other states and municipalities like Houston – assert that the bathroom you use in public spaces must match the genitalia you were born with.

So much for keeping government out of our private lives. 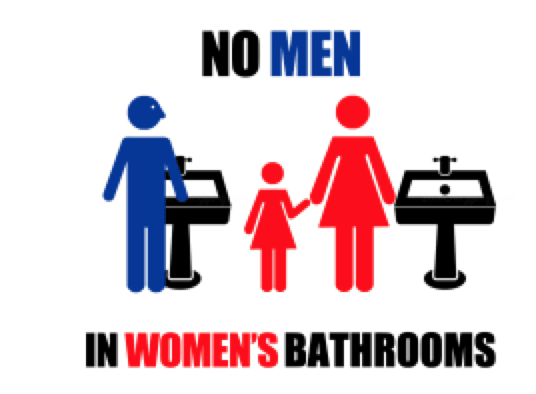 The laws are meant – or so their proponents claim – to protect women and girls from being sexually assaulted in public bathrooms. This is certainly a noble concept and as a rape survivor, I appreciate the sentiment. The thing is, there are not even a handful of cases of men dressed as women sexually assaulting women in public restrooms in the entire country. Which makes stoking these fears of men in women’s restrooms a canard. Yet this is the argument–straight men will dress as women and hang out in ladies rooms to assault women and girls under the guise of being transgender.

I admit I don’t want to be in a mixed restroom. But I have been knowingly sharing restrooms with trans women since I was a teenager and I never thought I was sharing those restrooms with men. Conversely, if a trans man walked into the ladies room with full beard and leathers–how would I know that was not a straight man? How would anyone?

Yet under the North Carolina law, someone I know well – a trans man with a full beard – would be forced to use the ladies room. Because he was assigned female at birth. And even though I have known him for more than 20 years, I would feel extremely uncomfortable sharing a restroom with him. Because, well, he’s not a woman.

Optics are everything. And the reality is, we’re in there to use the toilet, wash our hands and leave. No one – except adolescent girls in junior high who are talking about their crushes and putting on far too much make-up in groups – is hanging out in the ladies room. 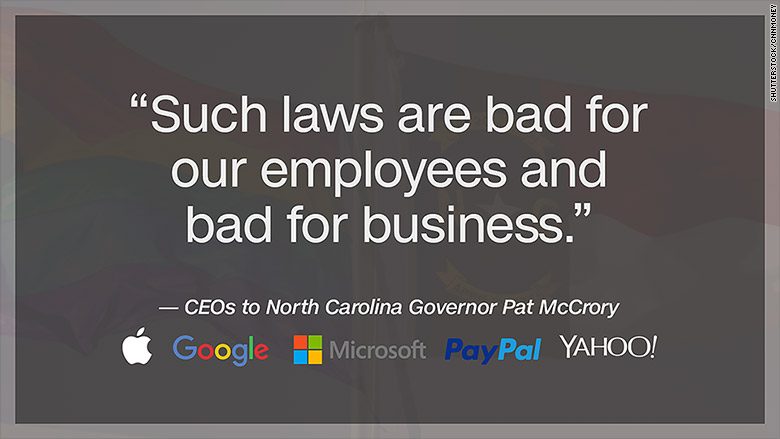 They impact millions of lesbians.

In my 20s I was partnered for several years with a butch lesbian who was often mistaken for a man. She was very handsome and tall. Once, we dressed in evening wear to go to the Metropolitan Opera in New York City. My editor had given me tickets to La Boheme. L and I were huge opera buffs and would never have been able to afford the pricey seats had they not been a gift. I was wearing an evening gown borrowed from another editor and L was wearing a tuxedo she had rented.

We looked smashing and we were having the time of our lives.

Until the interval. I got in line for the ladies room. But L knew she’d be seen as a man in the ladies room, yet was nervous about using the men’s room – which she ultimately did. But not comfortably.

When I was a teenager, sneaking into the gay clubs in my city, the ladies room was always filled with drag queens and trans women. It never seemed unnatural to me, even then. They were dressed as women, they were presenting as women, where else would they go? Not trans women. Not trans men.

Meanwhile, on the weekend of March 25, a trans woman was reportedly raped in the bathroom of the historic Stonewall Inn in New York.

Lynch believes these laws–not just the bathroom laws, but the bias laws that put all LGBT people at risk from discrimination in employment, housing, school, accommodations–are equivalent to the Jim Crow laws of the not-so-distant past.

Whether or not you agree with that interpretation by Lynch, what Lynch said to us was meaningful to all LGBT people, not just trans women and men.

“Some of you have lived freely for decades. Others of you are still wondering how you can possibly live the lives you were born to lead. But no matter how isolated or scared you may feel today, the Department of Justice and the entire Obama Administration wants you to know that we see you; we stand with you; and we will do everything we can to protect you going forward. Please know that history is on your side. This country was founded on a promise of equal rights for all, and we have always managed to move closer to that promise, little by little, one day at a time. It may not be easy—but we’ll get there together.”

All of us – lesbians, gay men, bisexuals, trans women and men – we have been Othered by our own society, our own country. These laws, these repressive and oppressive laws, could only be passed against us because we are the last group it is still okay to discriminate against. Lynch acknowledged us, acknowledged our suffering and struggle and oppression. Filed a civil rights suit for us.

Lynch sees us as equal–and deserving of the protection of our government.

What I did not know is since she was Secretary of State, Hillary Clinton has been quietly working behind the scenes to make the lives of trans persons and other LGBT people better – in America and elsewhere. According to The Daily Beast, “In June 2010, as the National Center for Transgender Equality (NCTE) notes, Secretary Clinton’s State Department began allowing transgender people to change passport gender markers with a physician’s certification that they had received ‘appropriate clinical treatment for gender transition.’ For the first time, sex reassignment surgery (SRS) was not required to make the correction.”

Then-Secretary Clinton had received a letter from a trans woman about her struggles finding employment. Clinton acted–not just for this one trans woman, although the changes worked for her, but for all trans persons in America. (This information was all part of the discovery in Clinton’s emails. There was a series of exchanges between an Illinois trans woman and Clinton. Her name is redacted, the exchange is not.)

There’s no question Republican legislatures and governors are going to continue to try and push anti-LGBT laws forward and set the lives of LGBT people backward. Fortunately, this is an election year and voting for down ticket candidates supporting LGBT candidates has never been more important.

Meanwhile, if you are one of the small but vocal cadre of people stamping your feet and saying you will vote for Trump because your candidate didn’t win the Democratic primary, your personal privilege is making the lives of the rest of us less privileged people sheer hell. The North Carolina, Mississippi, HERO and other anti-LGBT legislation has made that abundantly clear. LGBT people deserve full rights. Loretta Lynch and Hillary Clinton agree. And their protection is the kind we really need.