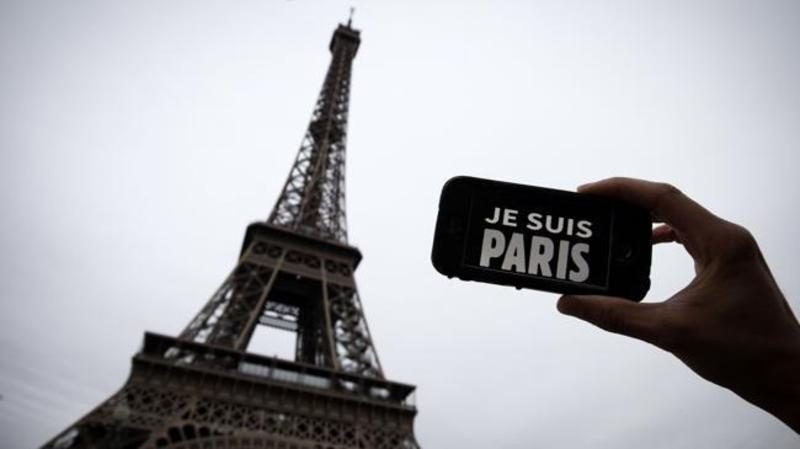 Many long-lived lesbians will remember that on September 13, 2001, the international French newspaper, Le Monde, published a huge front page headline:

Translated, it meant: We are all Americans, and the meaning was clear: the French people were standing with Americans, sending us support after the worst terrorist attacks ever to occur on US soil.

I was in Ireland that day, on vacation. In shock, my partner and I cancelled our plans and watched endless news of the attacks on TV. We were staying in a women-only B&B called Side by Side. The owners were an unusual lesbian couple: one woman came from Northern Ireland and one from the south, the Republic. To get together, they’d overcome cultural barriers – including hatred and violence between the different regions – similar to what a lesbian black-white couple might face in, say, rural Mississippi. Those two brave women inspired us, even as we watched the horrible news, to stay peaceful and open-minded, to resist the fearmongering that was rampant in the days after 9/11.

A lot of Americans at that time were blaming “Muslims” (as in “all Muslims”) for the attacks before there was any evidence or information about the perpetrators. This week, the same thing is happening in regard to the attacks in France. Already on Twitter there are spiels of anti-Muslim, anti-Syrian speech, which has nothing to do with comforting the survivors or restoring peace.

Back in 2001, I wished I could be in New York to offer at least my blood to the hospitals – until I heard that hundreds of New Yorkers were already doing that, and the blood wasn’t even needed, because there were so few survivors of the attacks. That gesture of solidarity and generosity moved me as much as anything else that day, more than the solemn playing of the US national anthem when a body was found in the rubble, and far more than the endless displays of American flags that had cropped up around the whole country when I returned to New York on 9-17.

All of that is coming to mind as I think about the lost lives and broken hearts of the Parisians after the attacks of 11-13-15.

As I write this, there are approximately 129 dead, many more hundreds wounded, and untold numbers of people grieving and in shock. No doubt more facts will come out in coming weeks, but the feelings are already clear. Around the world, people of goodwill of all races and religions are expressing our horror.

To say that the violence is useless is pointless, and maybe untrue. Maybe, for the murderers and terrorist masterminds behind this attack, this misery on the part of Europe and her allies, is the whole point. Maybe they want to intimidate and frighten us. Let’s not let that work for them.

For the rest of us, there can be a different result of this wretched suffering. This is a chance to ally ourselves with people in another country and another culture. Just as, after the terrorist attacks on our country, the French declared allegiance to America and Americans, we should now support the French however we can.

We can make a start with social media: we can change our Facebook profile photos to show a red, blue, and white background. We can tweet our sympathies to #parisisburning, #Frenchattacks, #Frenchlivesmatter , #toutsommesnousfrancais and whatever other hash tags appear in the next weeks. More importantly, we can pray or visualize peace, and we can think well about how to take meaningful actions. For right now, we are all French. We are all long-lived lesbians. We are all Australians, Americans, Canadians, Europeans and more: we are united in empathy and goodwill.