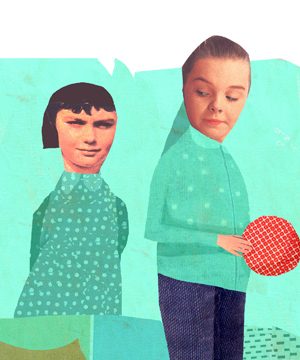 No sad story ever features a protagonist who is always picked second to last for athletic teams. At least the other kids thought I was funny. It kept me from being picked dead last in high school sports. That dishonor was usually saved for someone even fatter and less amusing.

I didn’t always suck at physical activity. I was a little monkey as a kid. OK, so I was visually impaired and a little big for my age, so perhaps I was a half-blind chunky monkey, but nonetheless, I climbed trees and jumped over trash cans with my bike. (I could throw a snowball half a block down the street and hit the kid who’d called me fatty and then run…but not far enough.) I was the stereotypical tomboy lezzy-to-be, even if I looked like I was going to grow up to be a nerd.

Maybe I wasn’t the best at organized sports, but I was good at fighting. Obviously, I had to be. I got plenty of practice until fourth grade, when peer pressure forced me to hang up the proverbial gloves. It was recess and Danny Brown was teasing another large-framed female until he got the tears he needed to claim victory. I marched over to him and called him a bad name, and then he called me a bad name, and then we called each other lots of bad names, and then I told him to shut up or I would shut him up.

He laughed at me. I saw red. The next thing I knew, my ample 10-year-old frame was straddling his scrawny corduroy-clad carcass, my right fist was positioned about eight inches from his nose and he was crying. Ha, I knew I had him. I expected to hear the roar of the crowd, cheering me on as I taught this bully a lesson he would never forget, but I heard nothing. I knew there were kids standing all around us; there are always other kids around you when you have a fight. Even if you have a fight on the moon at 3-in-the-morning, other kids will jump into their spaceships and show up to get a firsthand account of the action. I knew it was dramatic, but I wanted the crowd behind me as I delivered the final blow.

However, the crowd wasn’t behind me. What was wrong? Was the teacher coming? Didn’t these kids know what a jerk Danny was being? I studied the faces of the boys and girls standing around us. They looked kind of freaked out and disappointed. I couldn’t figure out what was going on, so I just stood up and walked back into the school, though recess wasn’t even over.

It took me a few days to understand why the other kids were avoiding my gaze: Beating up a guy, even a jerky guy, wasn’t cool in the eighth month of fourth grade.

If it had been October, I would have been the local hero, but it was April and fifth grade was only a summer away. The time for girl-versus-boy fights was over, even if the girl won. Sure, girl-on-girl fights were still allowed, but I lost my stomach for fighting after Danny.

In eighth grade, some butch girl I hardly knew had one of her friends tell one of my friends that she wanted to fight me, but since she didn’t even know me, it seemed a little odd. I avoided her for a few days but was finally forced into a meeting during lunch—one of my friends was tired of being the go-between. I told Butchy that I had no reason to fight her. She asked me if I was scared. I told her that I was not, which wasn’t entirely true because I thought that any girl who wanted to kick my ass without knowing me was a little scary. She chuckled and proclaimed my statement “cool.” After that, we had nothing further to say to each other, so I left and she and her groupies continued smoking behind the bleachers.

Looking back, I suppose there was some kind of homoerotic thing going on there, but it was a one-way street, sister, because you would have needed a four-wheel drive to navigate her blackhead-infested face.

In my freshman year of high school, I tried out for the basketball team and found out that I sucked. I remembered shooting hoops with the neighborhood kids at my uncle’s house a few years prior and doing pretty well, but fast-forward to the ninth grade and I was stinking up the court. What had puberty wrought upon me? The coach let me on the team, but I pretty much kept the bench from sliding around. I practiced but never seemed to get any better. Come spring, I was all about track and field. Surely there were one or two events I could excel in. You would think, wouldn’t you? I ran, but not fast enough or far enough. I could jump, but not over hurdles. At least I could throw the discus and put the shot. I felt pretty good about my strength and athletic abilities until my first track meet, when the steroid test-dummies from the opposing team were able to flick the zits off their backs farther than I could throw an eight-pound ball of iron. But at least I made the crowd laugh, with my wholehearted, face-contorting but impotent efforts.

That summer I tried tennis, and, surprise, I couldn’t master that either. I even sucked at bowling, which seemed a lot easier than it turned out to be…once I got stoned.
This whole lack of athletic ability hit me hard because one, I had once been good at physical activities, and two, some part of me knew that I was gay and therefore I would always be expected to be athletically inclined.

I panicked for a while and then found other things to amuse my teenage self: namely, drugs, sex and Debbie Harry. I traded in my dreams of being a jock for being the class clown. Like I said, at least I didn’t get picked last, and nobody said anything to me for fear of getting publicly insulted.

During my senior year, a friend suggested that running might improve my figure in time for the prom. She was right, it did, and I’m happy to report that it did not lead to a lifelong habit. Like any good queen, I eventually discovered the gym to be my temple of physical redemption. The ciggies and booze were beginning to take their toll, as were the alphabet drugs and 2-in-the-morning barbecued pork omelettes. I had to do something fast—risk having to date less attractive women or give up one of my vices. Neither of these options appealed to me. Thus, I did develop a lifetime habit of fitness. I had finally found something I could do: lift weights.

It did not, however, turn me into a better softball player. Whenever I would start a new job or find a new social circle, the softball team recruiter (there is always one) would offer me a spot on the team without a tryout. Luckily for them, I never took them up on it. I would politely decline and assure them that I only looked athletic, and thereby save the coach the trouble of picking me second to last down the road.

And what is the point of all of this? Gay Pride is here again. It’s the time of year when I worry about how I look and wonder if all those years at the gym are still paying off. For one week, every June, I’m a sophomore once more and cannot get that stupid ball in that goal or basket to save my life. Even though I look like I’m having fun and I couldn’t care less, I just want that stinkin’ ball to hit the mark one gall-darned time!

But this year, I’ll try to remember that I’ve already made the team and that Gay Pride is an event, not a competition.

And finally a word to you single gals who doubt your ability to score at this year’s Gay Pride festivities: Get out there and play, because getting picked last still beats the heck out of going home alone.