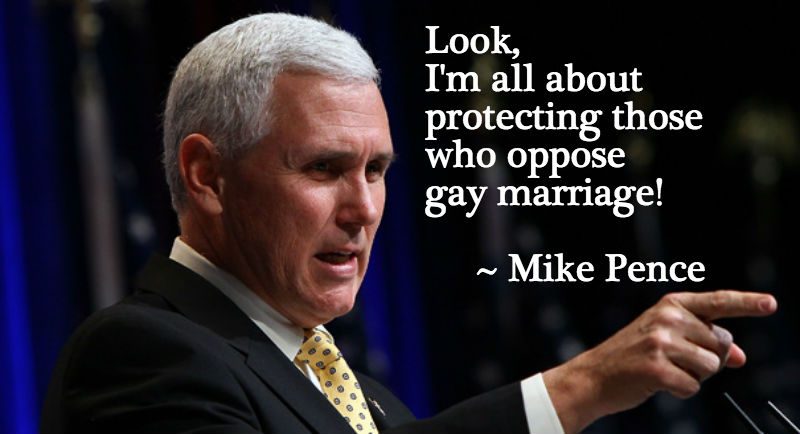 Donald Trump has the most anti-gay cabinet in history.

I wasn’t quite 16 when I was expelled from my all girls high school for being a lesbian.

A few weeks later, I was in a mental hospital undergoing conversion therapy.

Conversion therapy is the practice of trying to change a person’s sexual orientation or gender identity through a range of psychiatric and sometimes religious means. Conversion therapy (also referred to as reparative therapy) has been mostly discredited by the medical establishment and denounced by lesbian, gay and transgender groups.

Despite that, conversion therapy is only illegal in five states and the District of Columbia. Only one EU nation bans it – Malta – and they only did so on December 5.

Millions of lesbians have experienced what I did. Our stories are important; that they are dismissed or ignored is part of increasingly prevalent lesbian erasure.

Despite everything we know, despite how many celebrities have come out, what happened to me is still going on. VP elect Mike Pence is a proponent of conversion therapy. But he’s only one of a dozen virulently anti-LGBT people in the soon-to-be Trump Administration.

Conversion therapy is also in the GOP platform.

My father and I sat in the female principal’s office at the school that my grandmother, mother and sister attended, as she told my father I was a “bad moral influence” on the hundreds of other girls at one of the top two schools in my city. Mere days prior, my girlfriend’s mother had discovered a cache of love letters and trinkets of the sort teenagers in love share.

She had come to the school to pick up my girlfriend. We rode in silence to their little row-home in a different part of town from where I lived. I had been there many times, but on that day every little piece of paper torn from a notebook, every macramé bracelet, every paperback book of French poetry was laid out carefully like a museum exhibit on the dining room table.

It was one of the ugliest experiences in my life up to that moment.

My girlfriend was crying.

I was a girl who didn’t cry, so I was angry. I had no idea that my life was exploding before my eyes. Phrases like “I forbid you” and “never again” and “you should be locked up” and “ungodly” all washed over me.

I still thought there was a way out of that moment.

I tried to argue in my best debate-team calm. Then we got into a shoving match when the mother started to read from the letters and I tried to grab them from her. The mother slapped me and called me names. I reflexively slapped her back.

When the mother pushed me out into the breathtakingly cold autumn afternoon, there were flurries and it was getting dark and I had no idea what I was going to do next. I took the el into town because I wasn’t ready to go home. I wandered in the cold, unsure if I should go home again or just somehow find a way to leave my life for a new one. I went to the apartment of my French teacher, but then didn’t ring the buzzer.

I was so lost.

That night my girlfriend’s father called my father. This was something for men to deal with. Then he called our school. Then the school called my parents.

It was a devastating time. Not only was I forcibly separated from the girl I was in love with, like a lesbian Romeo and Juliet, but I was taken out of school and grounded at home while my parents searched for a new school that would take me. I was lectured every day on the evils of lesbianism. I read a lot, did a lot of chores, went to my after-school job at the local co-op, but had no way to call my girlfriend, no way to see her.

I was in a sort of prison. And I was cutting myself every day.

My father, educated at an Ivy League university, asserted, “But you’re pretty and boys like you.” My mother, educated at a Seven Sisters college, said she thought I should have been born a boy. (I agreed with her, but that’s a different story.)

My parents were educated people. They had been civil rights workers. They were Socialists. They were not under-educated nor were they bigots. One of my mother’s closest friends was a lesbian refugee from Germany. One of my father’s close friends, a well-known architect, was gay.

But they couldn’t imagine their daughter as a lesbian. My mother, a voracious reader, gave me books I had already searched out at the library that presented lesbianism as a dark and sordid “lifestyle.” In those books someone always killed herself. In those books I saw no future for my lesbian self. My mother reinforced that daily. “You’ll never be happy.”

At night my father would drink and explain to me that this was a phase. During the day my mother would harangue me about how I had shamed the family. After two interminable weeks they found a place for me. It wasn’t a new school. It was a mental hospital.

No one talked about conversion therapy in the 1970s. But it had been going on since Freud. Psychiatrists and psychologists trying to de-gay lesbians and gay men with everything from psychoanalysis to psychotropic drugs to electroshock therapy and even lobotomy.

None of it works, but that didn’t matter. My parents, like so many families before mine, were certain I was not a lesbian and all I needed was to be “fixed.” A mental health facility with a unit especially for adolescents offered conversion therapy.

#tbt 16 yr old me in dad’s shirt college freshman after my high school expelled me for being a #lesbian & conversion therapy failed. pic.twitter.com/CVqKDrDmzl

Mental hospitals are not places you even want to visit, let alone live in. Several of my lesbian friends would end up in the same facility as me within the same year for the same reason.

None of us would be “fixed.”

Conversion therapy is so brutal, it made its way into the iconic American Horror Story series created by openly gay showrunner Ryan Murphy.

Conversion therapy is torture. It’s such torture, that I became an activist against it in my early years as a journalist. I appeared on numerous TV talk shows with the unhappy members of Exodus International and other groups that asserted they could “cure” people of their homosexuality. For a few years I was the “lesbian in a dress” on these shows, talking about how violent conversion therapy was, how wrong it was and how it doesn’t work. I was young and pretty. I dressed in skirts and heels and lace collars and presented the serene face of the well-adjusted lesbian. Producers loved me. Conversion proponents, not so much.

This is the man who supports #conversiontherapy for your gay kids.
I was subjected to it at 16.
It doesn’t work but it IS actual torture. https://t.co/BsooZlgEqi

My life was the refutation of their big lie. And their lie was literally killing people as girls like I had been were attempting – and succeeding – at suicide because they were told they couldn’t be lesbians.

Exodus International was in business – because “curing homosexuals” is indeed a business – from 1976 to 2013, when it was shut down by founder John Paulk. Paulk and his wife, Anne, were ex-gay and ex-lesbian proponents of conversion therapy. Paulk came back out of the closet in 2013 and apologized for the “harm” Exodus had done.

Anne Paulk did not. She founded Restored Hope Network, an interdenominational Christian ex-gay ministry run primarily by former Exodus International leaders of which she is currently executive director. Anti-gay groups like Family Research Council which the Paulks worked closely with are embraced by most of the members of Donald Trump’s anti-gay Cabinet.

According to SPLC and other groups that monitor anti-LGBT hate groups, FRC is significant because, much like Exodus and psychologists that have specialized in conversion therapy, FRC is steeped in pseudo-science.

Much like Mike Pence and Trump himself, both of whom spoke at the Value Voters Summit 2016 – unlike any other Republican nominees including Sarah Palin. VVS 2016 was sponsored by FRC and Trump and Pence have both appeared with FRC president Tony Perkins.

Members of Trump’s inner circle and Cabinet have their own connections to FRC. Trump’s nominee for secretary of education, Betsy DeVos is an FRC donor. RNC chair and soon-to-be chief of staff Reince Priebus has been a speaker at the VVS. So have Trump’s pick for Attorney General, Sen. Jeff Sessions and his choice for Health and Human Services, Rep.Tom Price.

Current Attorney General Loretta Lynch spearheaded Department of Justice action against anti-LGBT laws like HB2 in North Carolina. Sessions will not be protecting LGBT rights. And Price? Price embraces the pseudo-science of FRC, which doesn’t bode well for LGBT health.

The FRC is most dangerous because it has situated its anti-LGBT rhetoric and work in, as its name suggests, research. That this research is much like the pseudo-science of conversion therapy is in no way surprising, even if it is shocking.

SPLC’s Mark Potok has been quoted about FRC: “A whole slew of real scientists have demanded that the Family Research Council stop using their data. Their research is worse than worthless. It’s propaganda.”

That propaganda is being incorporated into the Trump Administration even before the Inauguration. That’s concerning, particularly with men like Sessions and Price as key figures in that Administration. These men are not only not LGBT allies like Loretta Lynch was, they are actively anti-LGBT and their links to the FRC are acutely disturbing.

Also concerning is how much control Pence has in the administration. Pence has asserted in various interviews since the Republican National Convention that his model for vice president is Dick Cheney. Cheney was considered the real arbiter of key actions during the George W. Bush administration. Trump’s obvious distaste for the quotidian tasks of the presidency suggest strongly that Pence will be doing the hard work.

It’s been decades since my parents – with the best of intentions – attempted to de-lesbian me. Conversion therapy was one of the worst things to happen to me. The brutality of being told I wasn’t who I was and that who I was was terrible day after day in the prison of a mental ward would break most people. It breaks many.

#HighSchoolForMeWas I was expelled @ 16 from my all-girls HS for being a #lesbian & put in the bin for #conversiontherapy. But I SURVIVED!

It’s bad enough that only five states, DC and a dozen or so municipalities like Pittsburgh have banned conversion therapy. That the incoming administration embraces this and other anti-LGBT pseudo-science is dangerous. I attempted suicide. Others have succeeded. LGBT people must continue to fight this gruesome practice and all its attendant applications. For the next four years we will be the only ones to save LGBT lives. This is a good place to start.