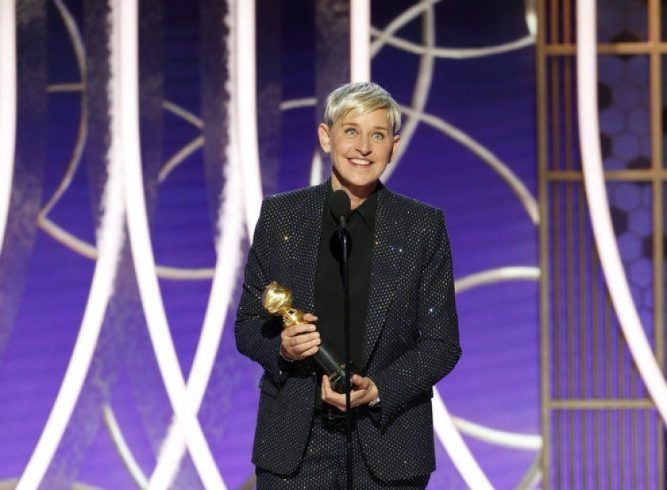 The 77th Annual Golden Globes ceremony on Jan. 5 was notable for political speeches, and long-overdue recognition of women and people of color.

There were also significant queer moments over the three-hour event, highlighting the impact of LGBTQ representation in film and TV and serving as a reminder of the extraordinary impact seeing LGBTQ people on screen has for those watching.

In a new year that has already been heralded by a cataclysmic climate crisis in Australia and the U.S. on the brink of war with Iran, it was uplifting to have an evening devoted to nothing but glitz, glamour and gayness.

Elton John won with his longtime song-writing partner Bernie Taupin. The duo won for Best Original Song–Motion Picture for “I’m Gonna Love Me (Again)” from Rocketman, the biopic about John’s life. Both men were ecstatic at their win.

“It’s the first time I’ve ever won an award with him, ever,” Elton explained. “We never won a Grammy. We never did anything together [awards-wise] except for this. I’m so happy, thank you very much.”

Taupin was also emotional about the award.

Taran Egerton won for Best Performance by an Actor in a Motion Picture–Musical or Comedy for playing John in Rocketman. He thanked David Furnish, Elton John’s husband and producer of Rocketman, “for allowing me to be the man who could play your husband.”

In performance categories, several out LGBTQ performers were nominated, including out actors Billy Porter (“Pose”) and Ben Platt (“The Politician”) for Best Performance by an Actor in a Television Series in the Drama and Comedy categories, respectively. Out Irish actor Andrew Scott was nominated as Best Supporting Actor in a Television Series–Comedy for his role as “Hot Priest” in “Fleabag.” Phoebe Waller-Bridge won two awards for her break out hit.

For Best Performance by an Actress in a Motion Picture–Musical or Comedy, out actress Beanie Feldstein was nominated for her portrayal of a high school overachiever in the hilarious “Booksmart.” That award was won by rapper-turned-actress Awkwafina, who made history by becoming the first Asian-American performer to win a Golden Globe in any lead actress film category.

The Best Foreign Language Film nominations included two queer films, the period lesbian romance “Portrait of a Lady on Fire” and Almodóvar’s “Pain and Glory.” Killing Eve” was also nominated for Best Television Series–Drama, as was lead actress Jodie Comer, in yet another Phoebe Waller-Bridge hit. Netflix’s queer “The Politician” was nominated as Best Comedy Series.

McKinnon’s introduction to Ellen brought tears and cheers from the audience. The notoriously private McKinnon revealed the impact Ellen had on her as a young lesbian.

McKinnon, 36, said of her teenaged self, “In 1997, when Ellen’s sitcom was in the height of its popularity, I was in my mother’s basement lifting weights in front of the mirror and thinking, ‘Am I gay?’ And I was, and I still am.”

Peppering her revelatory speech with her characteristic humor, McKinnon said. “But that’s a very scary thing to suddenly know about yourself. It’s sort of like doing 23andMe, and discovering that you have alien DNA. And the only thing that made it less scary was seeing Ellen on TV.”

She added, “She risked her entire life and her entire career in order to tell the truth, and she suffered greatly for it. Of course, attitudes change, but only because brave people like Ellen jump into the fire to make them change. And if I hadn’t seen her on TV, I would have thought, ‘I could never be on TV. They don’t let LGBT people on TV.’ And more than that, I would have gone on thinking that I was an alien and that I maybe didn’t even have a right to be here. So thank you, Ellen, for giving me a shot. A shot at a good life, and thank you also for the sweater with a picture of the baby goat on it.”

In her acceptance speech, Ellen paid homage to Carol Burnett and the impact that the acting legend had on her, saying, “I feel like we all think we know someone— there’s a connection when we watch them on TV for as long as we are on TV, and that’s what it was like for me with Carol Burnett. I felt like I knew her. I felt like she showed us who she was every week. She was larger than life.”

Ellen could have been talking about the way so many think about her on her daily talk show, now in its 17th season with more than 3,000 episodes. “We counted on her to make us feel good and she delivered every single week, she never let us down, she was hilarious in all the sketches that she did, and when she did the Q&A with the audience she was just genuine and personal, and I always felt like she was speaking to me,” Ellen said, adding, “At the end of the show, every time she pulled her ear, I knew she was saying ‘It’s okay, I’m gay too.’”

It was hard not to think that somewhere was another kid in their mother’s basement watching, seeing two generations of out queer women, and knowing that it was okay to be gay, too.