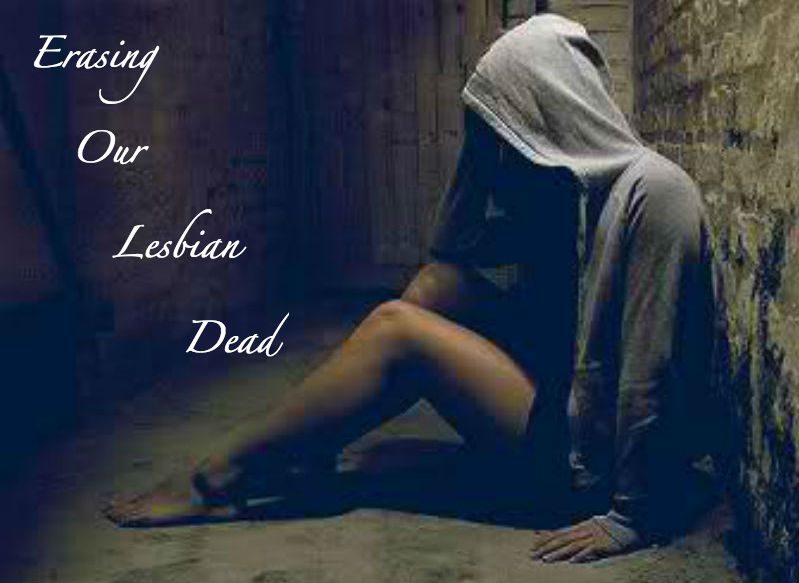 Now they are dead.
Executed.
Their crime?
They were lesbians.

For the past year I have been researching and writing a book on the erasure of lesbians–of how we are misrepresented in the media, on TV, in films and popular culture. I have chronicled how we are confused with bisexual women (which erases both lesbians and bisexuals). Of how we are correctively raped–to death. Of how our sexual orientation is hidden, as has been the case with some of the most famous and accomplished women in U.S. history, like Jane Addams and Dr. Alice Hamilton. Or how it is revised, as has been done with Stormé DeLarverie, the butch lesbian who is credited with starting the Stonewall Riots by throwing the first punch with police. These women were lesbians–not straight, not bisexual, not “questioning,” not queer, not transgender.

The erasure of Sakia Gunn began almost immediately after her murder and hasn’t stopped since.

I’ve carried the torch for Sakia Gunn for more than a decade, since I first wrote about her killing. Sakia Gunn, a cute black butch lesbian exactly two weeks short of her 16th birthday when she was murdered for loving women.

Gunn was killed for talking back. For declaring her lesbianism. For refusing to pretend to like men when she loved women. She was on the streets of Newark, New Jersey–ten miles and a half hour from New York’s Greenwich Village where she had spent the evening with friends–on her way back to the home she shared with her mother and grandmother. Saturday night had turned into Sunday morning.

It was May 11, 2003 at about 3:30 am when some men catcalled Gunn and her four friends as they waited at a bus stop. Maybe it was the company. Maybe it was because Saturday night is butches’ night. Maybe she was just sick to death of men telling her what she should do with them instead of what she wanted to do with other girls. But when the men propositioned the young women, they said no. Gunn was the most vociferous.

“At some point during their interaction, they made their sexual orientation known. They made it clear that they weren’t interested,” Lieutenant Derek Glenn, a spokesman for the Newark Police Department told the Associated Press after Gunn was murdered.

The men–also black–were enraged that Gunn and her friends, all teenagers, none older than 17, had told them to screw off. They leapt from their car and chased the girls, getting into a physical fight with them, in the course of which the man who stabbed Gunn to death grabbed one of her friends by the throat and threatened to kill her. When Gunn tried to rescue her, she was stabbed in the chest.

Gunn died of her stab wounds in the arms of her 16-year-old cousin, Valencia Bailey, at University Hospital in Newark. The girls were rushed to the hospital by a passing motorist they flagged down. But Gunn’s aorta had been cut in the stabbing. She bled to death.

Richard McCullough, 29, was charged with her murder and “with a purpose to intimidate an individual or group because of sexual orientation,” which carried enhanced sentencing options under hate crime laws. In a plea deal, McCullough, who was charged with second-degree murder,  pled guilty to the lesser charge of manslaughter–a charge Gunn’s grandmother said was not nearly enough for the young woman’s killing. The second man, Allen Pierce, was not charged in the crime.

Gunn’s murder inspired the musical “This One Girl’s Story,” which debuted in New York as part of the 2011 New York Musical Theatre Festival.

Last year I wrote about the honor killing murders of Britney Cosby and Crystal Jackson outside of Galveston, Texas. The black lesbian couple had been together for several years and lived in Cosby’s family home with Cosby’s 90 year old great-grandmother for whom they cared and Jackson’s five-year-old daughter.

Cosby, 24, was beaten to death–her neck was broken and she had numerous blows to the head. Jackson, 24, was shot once in the head, execution-style.

Arrested for the killings and still in jail but with no trial pending is Cosby’s father, James Cosby, 46. The elder Cosby was reported by Britney’s mother to have been upset by her “lifestyle,” which he thought “brought shame” on the family.

It has been widely reported that James Cosby, a Muslim, allegedly killed the lesbian couple in an honor killing to avenge the family for Britney’s lesbianism.

They were so happy. You can see it in the photographs. Anna has her arm around her wife, Lisa. Lisa has her head tilted onto Anna’s shoulder. Their families said the women did everything together–including their work. They were both Petty officers in the U.S. Coast Guard. Nothing could tear them apart. Nothing except Adrian Loya, a fellow guardsman, who had, according to Lisa’s family, “fixated” on her when the three were stationed together.

Loya planned out her murder, according to Massachusetts law enforcement. On February 5, 2015, armed with two rifles, a 9mm handgun and a shotgun, police said Loya set a car on fire outside the Trubnikovas Cape Cod home to keep officers at bay, and also set fake bombs around the perimeter of the property. He also shot at police who responded to a home invasion call, wounding one officer.

Loya’s plan was to murder Lisa Trubinokova on his 31st birthday. If he could not have her, if she was going to choose another woman over him, he would have to kill her. If he could kill the wife as well, all the better.

According to court documents in March, Loya allegedly wrote a 250 page essay about why Lisa deserved to die, and he traveled to Massachusetts from his home in Chesapeake, Va. He stalked Trubnikova and her wife, videotaping them with a camera affixed to a tree outside their home. And when he was ready, he burst into that home, heavily armed and wearing a mask, all the while videotaping his actions so he could have a recording of what Lisa looked like when she died, court documents assert.

Loya watched the two women on his laptop for hours, then at 2 am shot his way into the house. He stormed into the couple’s bedroom, where the two women were in bed, according to the documents.

Loya ordered them to get up, according to the police report, and allegedly started shooting at Lisa Trubnikova, hitting her several times in the legs and torso and killing her. Anna Trubnikova was also seriously injured. She did attempt a call to 911, according to the documents.

University of New Hampshire student Elizabeth “Lizzi” Marriott was a 19-year-old sophomore involved with her first serious girlfriend, Brittany Atwood when she was murdered by Seth Mazzaglia, then 30, after refusing his advances in October 2012. Mazzaglia was convicted of her rape and murder last year.

Atwood gave a victim impact statement at the sentencing of Mazzaglia on August 11, 2014. The slight, petite, short-haired brunette began quietly and nervously, “I stand here not as Lizzi Marriott’s best friend but as her girlfriend. One day you wake up and you’re with the love of your life and you’re the happiest girl in the universe, and the next day she’s gone. Just like that. No warning, no nothing. Everything is taken away. In an instant. Your heart, your soul, your faith, your pride and your love are torn from your body. Life doesn’t prepare you for this feeling of loss, tragedy, emptiness, darkness and hate. It can’t be explained. ”

Atwood looks and sounds painfully young. She shakes a little as she stands at the podium, reading her prepared words. But her body language says it all: She is another victim of the killer. Like Lizzi’s family who also gave impact statements, she is bereft. When she says, “Lizzi was and is and always will be the most amazing and wonderful and talented person, friend and girlfriend in the whole entire world,” it’s hard to imagine there weren’t wrenching sobs in the courtroom. How could anyone listen to this earnest young woman, so small yet so brave, talking about how much the vivacious young marine biology student had meant to her and not break down?

After hearing Atwood, you wanted to know Lizzi Marriott. You wanted to hear the laugh and see the hair pushed back and watch Lizzi and Brittany walking arm in arm on campus.

Except Lizzi had been, like the others, executed for being a lesbian.

Lizzi Marriott only ever made the local news, except for an episode of CBS’s “48 Hours” which erased her lesbianism and gave less than three minutes to Brittany Atwood. Like Sakia and Britney and Crystal and Lisa, there were no nationwide vigils for Lizzi. No hate crimes legislation authored in her name. No memorials. No reminders that lesbians are murdered all the time and have been for decades and we still pretend they weren’t lesbians or we just ignore their murders altogether.

There are so many other names. So many stories to be told. From Kitty Genovese  to Mollie Olgin and Mary Kristene Chapa. There is Rebecca Wight. Roxanne Ellis. Michelle Abdill. Samanata Shrestha. So many others. Too many others.

They were murdered for being themselves.
For being lesbians.
Erased.
Because of who they were.

McCullough called Gunn a dyke before he stabbed her through the heart. In court he tried to say she ran into his knife–she stabbed herself. The judge refused to accept the plea deal unless he stated he stabbed her. To death. Executed her. For being a lesbian.

Since the February murder of Coast Guard Petty Officer Lisa Trubnikova, there have been nine stories. There are no follow-up stories on James Cosby or a trial date. Nothing to indicate anyone cares that he bludgeoned his daughter Britney  to death and executed her partner, Crystal Jackson and that Crystal’s young daughter is motherless.

We have an obligation here, as lesbians, to remember our dead. To demand an accounting for their murders. To speak their names over and over again. To make them count, because they mattered to us.

Imagine Valencia Bailey, just 16,  holding her cousin Sakia Gunn to her as she bled to death on the way to the hospital in some stranger’s car–all because she dared to say no to a man.

Imagine Anna Trubnikova as she was nearly killed and watched her wife, Lisa, being murdered.

Imagine Brittany Atwood standing, so small, at that podium in the courtroom just feet from the man who killed the love of her life.

Imagine the last moments of Britney Cosby’s life as she watched her father execute her lover and then come for her, smashing her over and over again with all the hate he felt about, as he called it, her “gay shit.” Over-killing her the same way Matthew Shepard had been over-killed. Over-killing her the same way Kitty Genovese had been killed decades before. Over-killed the way lesbians often are.

Because they were lesbians.
Because they said no.
Remember their names.
And don’t let anyone erase what they died for.