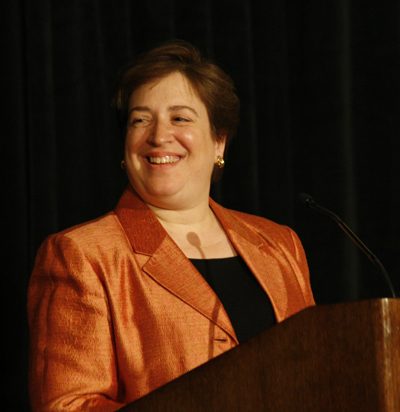 Elena Kagan was sworn in on Aug. 7, 2010 as the newest and youngest member of the U.S. Supreme Court, replacing the court’s most liberal and longest-serving member of the current court, Justice John Paul Stevens.

Her sexuality is only one of many questions we have for the newest Supreme Court Justice when she dons her robes this October.

Elena Kagan was sworn in on Aug. 7, 2010 as the newest and youngest member of the U.S. Supreme Court, replacing the court’s most liberal and longest-serving member of the current court, Justice John Paul Stevens. Kagan is the 112th justice and only the fourth woman in the Court’s history. Kagan will have a formal investiture ceremony before a special sitting of the Court on October 1, 2010.

The question most queer Americans want to know, however, is this: Is Kagan the U.S. Supreme Court’s first lesbian justice?

From the left came concerns that Kagan was too conservative and dangerous on civil liberties issues. Many progressives noted that her support for some of the more controversial elements of President Obama’s legal strategies (she was Obama’s Solicitor General and the first woman to hold that post) meant that she was at best centrist and at worst a conservative.

Progressive legal scholar Jonathan Turley, in a May 10 column, termed her nomination “the last nail in the liberal coffin.” In elucidating his concerns about Kagan, he said, “For many liberals and civil libertarians, the Kagan nomination is a terrible act of betrayal after the President campaigned so heavily on the issue of the Supreme Court during his campaign.

[Obama] is now replacing a liberal icon [Stevens] with someone who has testified that she does not believe in core protections for accused individuals in the war on terror. During her confirmation hearing Kagan testified that she believed that anyone suspected of helping finance Al Qaeda should be stripped of protections and held under indefinite detention without a trial—agreeing with the Bush Administration.”

The right had different concerns, among them her lack of actual courtroom experience. Kagan, unlike most justices, has never been a judge and has also never argued a case before the Supreme Court. She did, however, serve as Special Counsel to President Clinton.

This lack of actual courtroom experience bothered the right, but more concerning to the right was the fact that she had, as Dean of Harvard Law School, upheld a ban on military recruitment at the campus because she felt the “Don’t Ask, Don’t Tell” policy on lesbians and gay men in the military was discriminatory. She urged students to protest the DADT policy. The right believed this made Kagan anti-military.

Both sides had concerns yet Kagan’s record in her actions and writings do put her more to the right than left of center.Then there was the queer controversy. Not the DADT issue, but Kagan’s own sexual orientation.

The New York Daily News put a photo of a younger Kagan playing softball—the universal lesbian sport—on the front page after her nomination. The implication that she was a lesbian was clear. Rumors had long swirled that Kagan was indeed a lesbian and people on both sides, left and right, agreed that she looks like a lesbian.

Harvard friends who requested anonymity told reporters that she was gay. Others “defended” her, saying she dated men, but the relationships were “secret.”

And then the White House, in an extraordinary—and wildly homophobic even for a consistently back-pedaling on LGBT issues president—move, issued a statement that Kagan’s sexuality was off limits.

Back when Clarence Thomas underwent his own judiciary committee hearings for a position on the Court, he asserted that being accused of sexual harassment by a former colleague, Anita Hill, was akin to a “high-tech lynching.”

Hill was badgered and abused far more than Thomas in those hearings, and inferences that she was a lesbian were made repeatedly, most notably by Wyoming Sen. Alan Simpson, who referred to her “proclivities.”

But the issue was a legal one: Did Clarence Thomas, soon to be a justice, sexually harass a colleague? The hearings found in Thomas’ favor.

The hearings for Kagan ignored her sexual orientation. But should they have done? How is it not germane, when cases will be coming to the Court in the next few years dealing with DADT, DOMA and same-sex marriage, whether or not she is actually a lesbian or simply an unmarried heterosexual woman? And if she is merely an unmarried heterosexual woman, why doesn’t she just say so? Why the secrecy? Why the need for the White House to shield her from any discourse on the subject? Other justices aren’t hiding their sexual orientation.

One reason the issue is pressing is because of Kagan’s disturbing stances on DOMA and same-sex marriage. If she’s a closet lesbian, she has more to “prove” to her colleagues on the Court in terms of her lack of bias. Which could mean bending over backwards in the opposite direction from civil rights for lesbians and gay men.

Consider that during her confirmation hearing for Solicitor General Kagan threw queers under the legal bus, saying that “There is no federal constitutional right to same-sex marriage”—the exact opposite of what the Prop. 8 case found.

At the same hearing Kagan was asked about DOMA (under which states do not have to recognize same-sex marriages from other states although in May a Massachusetts federal judge said DOMA was unconstitutional). Kagan said she would defend the act if “there was any reasonable basis to do so.”

Also of concern for women is Kagan’s stance on abortion. During the Clinton Administration, she argued against the legal right to third-trimester abortion, which is almost always performed to save the life of the mother.

There’s no doubt that Kagan is smart, and as she showed in many of her responses during the judiciary hearings, quite witty. But many conservatives have been funny and smart, even as they have undercut our most basic legal tenets.

The jury is still out on Kagan, of course, since she has yet to even hear her first case. But the secrecy surrounding her personal life is baffling and concerning because it speaks to a problem with the conservative nature of the Court itself and also of the Obama Administration which has upheld so much of the most problematic civil liberties violations of the Bush Administration.

Queers should take note: the most offensive legal discourse from the High Court came from Byron White—appointed by John F. Kennedy—who wrote the opinion in the 1986 case Bowers v. Hardwick which contended that consensual gay sex was illegal and immoral. The justice who wrote the scathing dissent in the case, Harry Blackmun (who also authored the landmark Roe v. Wade case), was a Republican nominated by Richard Nixon.

The justice to overturn Bowers v. Hardwick with the 2003 Lawrence v. Texas opinion was Anthony Kennedy, another Republican nominated by George H.W. Bush. Kennedy wrote in that case that penalizing lesbians and gay men from having consensual sex was depriving them of the “pursuit of happiness” as illuminated in the Declaration of Independence.

In short, nominees are not always reflective of the party from which they have been nominated.

When Kagan dons her robes on the first Monday in October, we won’t know if she’s queer or straight. But we will know that she has a sketchy record on LGBT issues. So whether she is or isn’t the first lesbian Supreme Court justice, she’s definitely not someone we can count on to uphold our civil rights.