A Uterus doesn’t qualify you to be President, Sanders surrogate stirs sexist controversy.

First we had the Bernie Bros.

Now we have Killer Mike.

You don’t have to be a supporter of Hillary Clinton to realize that men are having a difficult time adjusting to the idea a woman might be the next president of the United States.

Michael Render, known by his stage name as rapper Killer Mike, one of Sen. Bernie Sanders’ top surrogates, has caused more controversy for the presidential candidate by telling people at a Feb. 16 rally at HBCU Morehouse College in Atlanta that “a uterus doesn’t qualify you to be president of the United States.”

The rapper, who previously supported GOP candidate Sen. Rand Paul, has been brought on to the Sanders team to do outreach to African American youth. Polls show that while Sanders has a big advantage with white millennials, Clinton has more than 70% of the vote among black and [email protected] millennials and the most recent polls. 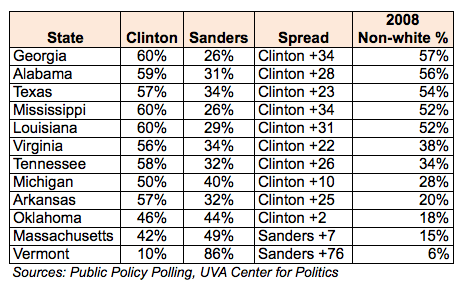 The response to Killer Mike’s remarks were unsurprisingly swift.

That women feel entitled to be president just bc of gender… THERE HAVE BEEN NO WOMEN PRESIDENTS. Women aren’t the ones who’ve felt entitled

No serious person alleges that @HillaryClinton‘s uterus is on her list of stated qualifications for president. Implying as much is sexist.

Many Clinton campaigners, especially those within the black community were outraged, especially as Killer Mike’s comments came just a few hours after Clinton delivered what many were calling an historic speech on race in Harlem.

The Sanders campaign responded as they have with every allegation of sexism: dismissively. Sanders himself called the furor “gotcha politics.”

How? When politicians use surrogates to lure in voters, they are–for good or ill–responsible for those surrogates. Clinton was asked about former Secretary of State Madeleine Albright’s comments at the last debate and Albright herself wrote an apologetic op-ed. Fortunately for Sanders, he won’t have to be asked a similar question before the highly contested Nevada caucuses on Feb. 20 and South Carolina primary on Feb. 27.

Despite Sanders waving the controversy away, the reality is, sexism has led in this presidential election. When has a male politician’s candidacy ever been reduced to his sex organs?

Sanders and Render himself should have apologized. That neither did–in fact, just blamed a woman for the comment–is problematic at best. Structural misogyny is real. That some women have internalized it is not surprising. But the idea that the first female candidate for president in U.S. history to come close to the nomination is nothing more than the sum of her sex organs? That’s the height of sexism.

The reality for women in America and American politics is that our uteruses are legislated against by male politicians every day. Gov. John Kasich, a top contender for the Republican nomination, just signed legislation in Ohio further restricting a woman’s right to choose. Since Roe v. Wade became law in 1973, there has never been a time when women’s uteruses were not the subject of scrutiny by male politicians.

So for Sanders and his surrogates to reduce the accomplishments of Clinton, who has a broader resume than any presidential candidate in 80 years, to her uterus?

That’s the very definition of sexism.

A reality Sanders and Render didn’t just ignore, but dismissed as irrelevant.

Does Sanders’ “political revolution” not include women? Because women are the largest marginalized group in the country.

Zerlina Maxwell is a former writer for Essence, Ebony, Feministing and Cosmopolitan, a commentator for MSNBC and Sirius radio and has been one of the most outspoken women on Twitter on issues of sexism and rape culture over the past few years. A survivor, Maxwell’s provocative speeches and writings on teaching men not to rape are among the most powerful writings on the subject of rape culture.

Maxwell, who worked on the Obama election campaigns and who has consulted with the U.S. State Department, was recently hired as Digital Outreach Director for Clinton’s campaign. With sexism in high-gear this election season, it’s apparent her expertise will not only be needed, but will be required 24/7.

A few months ago I started a hashtag on Twitter: #VoteYourVagina. It was partly in response to actress Susan Sarandon, a Sanders supporter, saying she doesn’t vote with hers. But it was more to make women aware that whomever they choose for president in this highly contentious election should have women’s issues and concerns front-and-center. Choosing a candidate is a deeply personal decision, but voting your own interests should be part of that decision.

Women are America’s forgotten and neglected oppressed. We have been denied many of our most basic rights throughout American history. When Hillary Clinton says her historic candidacy is something to consider, she’s not wrong.

There’s no place at the lead table for women in American politics. The majority of Cabinet positions have never been held by a woman, Congress is fewer than 20% women, fewer than ten percent of governors are women.

The numbers tell the story. Sanders, a career politician with 30 years in Congress, knows this, even if somehow Killer Mike does not. Focusing on the frontrunner’s uterus while ignoring these facts of American women’s lives is sexist, reductive and no way to run a presidential campaign. Does Sanders’ political revolution include women?

I hope so. But dismissing outrage over blatant sexism from his own campaign as “gotcha politics” implies that sexism has not been addressed by Sanders’ campaign or the candidate himself.