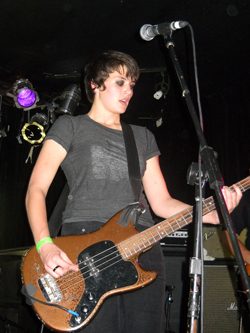 Garibaldi on the Bass

Tonight it’s raining and I’m sloshing through puddles on the way to Beat Kitchen in Chicago to check out This Is Versailles.

I sit in my car outside of the venue and wait until a “cool time” to arrive, which I clock at being about fifteen minutes later than it is now. I’m never late. I’m nerd-early because I’m a journalist, and as veteran rock critic Lester Bangs tells young William Miller in the film Almost Famous, journalists are “uncool.”

Even the hot lesbian ones.

I sneak inside and lean against the grimy wall in a way that I hope makes me look thin. Onstage and running through a pretty intense soundcheck are three dudes and Caitlin Garibaldi. “That’s the kind of band that I wanted to be in,” she maintains. “A band with people who don’t let gender get in the way of the way a band should be.” The fact that she looks like the biologically engineered progeny of Angelina Jolie (Hackers era) and Keira Knightley, is just beside the point. It’s all about the music, which in this case is a loud, raucous, occasionally melodic brand of nu-gaze punctuated by grandiose guitar noise and infectious beats.

“Hi,” calls Garibaldi from someplace on high. The band uses their own signature fluorescent stage lights which blind the audience. I cannot see her, but I know that she can see me.

She giggles. “Everyone does that sometimes.”

They jump down from the stage for a smoke break. Outside, the band’s other lead singer and guitarist, Jaisen Ehas drapes a large and protective arm around Garibaldi. He calls everyone buddy and delights in David Lee Roth impersonations and reenactments of video from Funny or Die. The two other members, drummer John Rungger and guitarist Neil Yodnane are subdued, declining to compete with the bluster of Ehas or the beauty of Garibaldi.

“One of the complicated things about being in a band is the issue of gender and the sexual tension thing and I’m queer so I guess I didn’t expect that to be a part of it,” confides Garibaldi in a rare candid moment. “I guess I thought that, you know, you’re one of the boys, but then you fall for someone and that’s kind of out of your control.”

As a bass player, she has become used to going against the grain. “I really like the whole idea of a counter-melody. Something that, really, if there’s a push-pull in the music, it’s always the pull. Kind of a little bit against what the main rhythmic and melody strain of the song is. That’s what I believe.”

And belief is what it takes to pick up a four-string, drink a PBR or five and rock a club on a weeknight. These are the bands that work their asses off to earn every bit of the five bucks it costs to see them. Only time will tell if Caitlin Garibaldi and the boys of This Is Versailles convert the masses or hang up their shoes for good. The world is waiting.