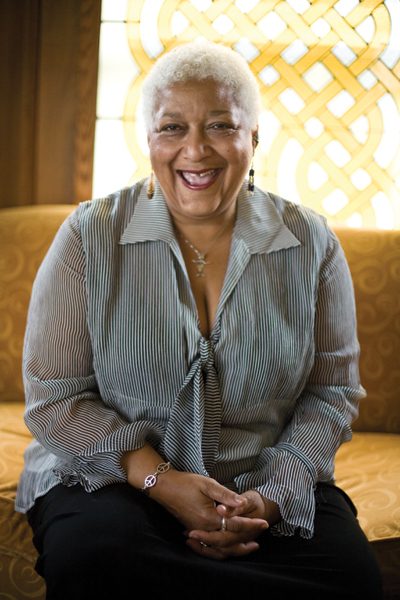 Twenty-one years after the publication of her award-winning novel, The Gilda Stories, and many books, essays, poems, and plays later, Jewelle Gomez remains an icon of the lesbian literary scene in the U.S

Twenty-one years after the publication of her award-winning novel, The Gilda Stories, and many books, essays, poems, and plays later, Jewelle Gomez remains an icon of the lesbian literary scene in the U.S. Now in her mid-60s, still a stunning femme with light gray hair and sparking eyes, Gomez strikes an imposing figure—as a lesbian, a woman of color, a writer, and an LGBT activist.

“Everything I write, and my activism as well, centers around creating community, the responsible use of power, and the feminist understanding that we’re all connected,” Gomez explains. “And that includes our oppressions.”

But Gomez is far from pedantic. “I’m always trying to write about these things without boring people to death! The issues are always there, underneath everything in our lives. It just seems like we can deal better if we are conscious of their influences and use our smarts.”

Her much-beloved lesbian vampire, Gilda, exemplifies how Gomez does this—bringing political issues to the fore in an accessible context.

“When I sit down to write, Gilda is there, waiting like a friend,” Gomez says. “She’s both my past and my future—she carries all of the hopes and fears that I do. Writing genre fiction makes it easier to convey the principles I’m concerned about.

Readers will sink into Gilda’s vampire world and not pull back, because it’s a feminist worldview. That’s why I keep writing her.” Gilda devotees will be pleased to hear that Gomez hopes to get another Gilda novel, The Alternate Decades, out in the next couple of years.

Finding the time to write, and the money to live while she’s writing, is always an issue for Gomez—a former NEA grant recipient. “My friends and contemporaries who have been mourning the loss of Adrienne Rich recently are also mourning the absence of the vibrant lesbian community that nurtured her work, as well as that of Audre Lorde, Cheryl Clarke, and many others,” she says. The impact of the economy and monolithic corporations like Amazon has taken its toll on lesbian literature.

“Because there are almost no independent bookstores, you have to work harder to find lesbian-feminist writers,” Gomez says. “Attending readings, reading blogs, helping to create the dialogues that we used to have in lesbian-feminist journals throughout the year” is a way to make that artistic and feminist connection, but, she adds, “I don’t know any way to make it financially easier on a day-to-day basis. I’ve worked a day job all of my life, as do most writers I know.

Much sought after as a speaker, Gomez is presenting the keynote address at the Golden Crown Literary Society Conference this year, speaking at the Goldie Awards ceremony about how lesbians must create their own stories.

“The mythology we’ve grown up with helps shape how we think, what we believe, the actions we take—or don’t. Whether it’s vampire lore or ethnic folktales or television, we learn how to be ourselves from these mythologies. We can make our own mythology as lesbian feminists. Look at what others have done that is heroic. If we embrace a larger-than-life mythology, we can actually change the world and not feel like everything is out of our control.”

In recent years, Gomez has focused on playwriting, and Waiting for Giovanni, her play about James Baldwin, has made her realize the importance of giving voice to people traditionally silenced by mainstream culture—like women, LGBT people, and people of color.

“I guess as I’ve gotten older what is most important has shifted and changed,” she explains. “As I’ve been working on my play about James Baldwin and watching audiences positively crackle with the knowledge about him, a gay man of color who made a difference in our world, I see that for many Baldwin is a new entity.

Working on moving the play to other cities after its San Francisco premiere, and working on my next play, I feel compelled to make the history of queer people of color a living thing. Theatre reaches an interesting cross-section of people, and I love the idea that they all have to sit in seats beside each other and how dynamic that interaction is. Few people leave the theatre the same as when they went in.”

Generating that kind of excitement and actual physical electricity is tantalizing for Gomez and part of what propels her. “Social change is what it’s always about for me as a lesbian-feminist writer,” she says. And that change is what she has dedicated her art, her writing, and her life too.