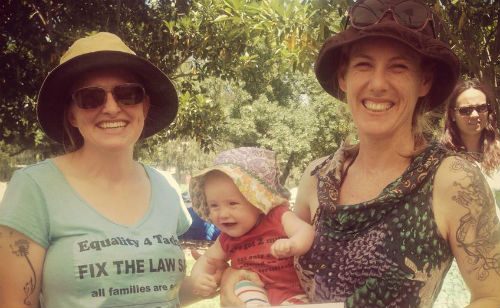 On Mother’s Day 2014, Sally’s partner Elise gave birth to a beautiful baby boy. However when they tried to register his birth, they were shocked to have their forms returned by Births, Deaths and Marriages with a demand to prove they had lived together for 3 years before they conceived: not ‘were they in a loving, committed relationship?’, nor even whether Sally had consented to the insemination procedure…. Just, did they cohabit for long enough?

“We truly thought that we had moved beyond discriminating against a child because of the sexuality of their parents. But it seems not.”

Although Sally and Elise were in a de facto relationship – they owned a home together and were known by family and friends to be a couple – because they hadn’t lived together for three years, in SA, this just wasn’t enough. If he’d been born anywhere else in Australia, he’d have both mums on his certificate. Opposite-sex partners need not be in any form of prescribed relationship when they access assisted insemination via a donor. They can then register the resulting birth with the male partner’s name as father/co-parent without question; the biology or technology involved are not deemed to be important.

Elise and Sally’s baby was conceived on their very first attempt. This meant they hadn’t yet lived together long enough for Sally to be legally considered Tadhg’s other mum.

SA is the only state in Australia to still include discriminatory barriers to same-sex parentage. The inconsistencies between state and federal law mean that the couple pays tax as though they are a family of two parents with children, and if their relationship broke down, they would be seen to be equal parents in the division of property and for custody arrangements. And yet, in SA, Sally is not recognised as Tadhg’s parent at all.

As a legally invisible parent, Sally can’t pass on her UK citizenship nor sign school consent forms. She can’t make decisions about medical treatment for her son in an emergency where Elise is either unreachable or also injured. Worse, she would have to fight to keep custody of her own child if Elise died.

Australia has signed international conventions that state that children have the right to be registered by both their parents, and to the legal responsibility and protection of both, without discrimination of any kind.

Sally and Elise are now campaigning to have changes made to the SA legislation to bring it into line with the rest of Australia and have lodged a complaint with the Human Rights Commission. A response to their complaint must be received by the 12th of February 2015.

See their petition here and for more information, visit www.facebook.com/Equality4Tadhg.