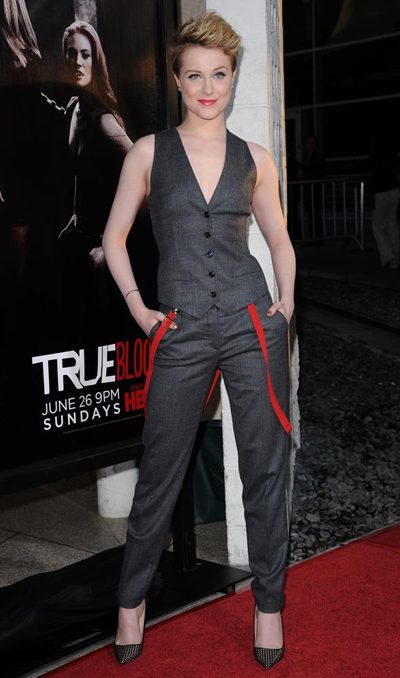 Evan Rachel Wood’s Hot New Look and Amber Heard in Guess. Plus, the latest from the lesbians kicking butt on The Voice.

If Evan Rachel Wood didn’t move up on your hot list after coming out as bisexual in Esquire, perhaps her sexy new pixie cut will help to persuade you. She debuted the ‘do at Tuesday’s True Blood season 4 premiere.

Fans will remember she loves David Bowie and is “into very androgynous things. Guys, girls…I’m into androgyny in general.” She certainly is—check out those suspenders.

The lesbians-in-residence at The Voice brought their best to the stage this week to stay in the game. Beverly McClellan took on “The Thrill is Gone” by B.B. King, giving us a slow-burning and soulful performance.

Judges called out lesbian Vicci Martinez’s rendition of Florence and the Machine’s “Dog Days Are Over” the “strongest performance of the night.” I have a crush on her arms.

With cuffed Levi’s and red lips, Amber Heard channels Marilyn Monroe in the Fall 2011 campaign for Guess. The video was shot by photographer Ellen von Unwerth with a nod to Marilyn Monroe’s role in the 1956 film Bus Stop. Johnny Cash’s “Folsom Prison Blues” provides the perfect soundtrack for Heard’s sojourn through the Wild West.