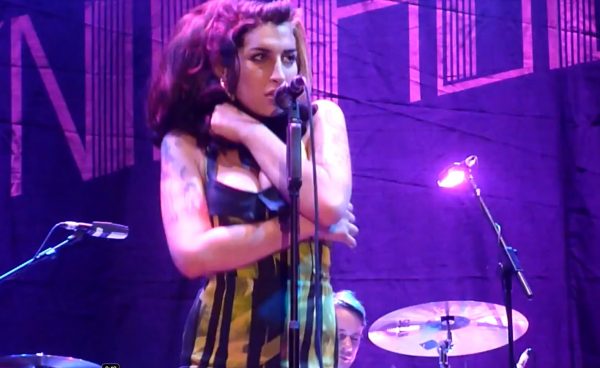 Amy Winehouse Melts Down and the Real Reason Megan Fox Was Booted Off Transformers 3. Plus, check out Bitch’s new video for ‘Pussy Manifesto.’

Remember back when bisexual songstress Amy Winehouse was at the top of her game? It was about 2006, and everyone suddenly wanted a beehive hairdo and an English accent.

Winehouse won five Grammys that year. Then it all started to go terribly wrong, with highly publicized domestic abuse culminating with Winehouse spiraling with drugs and alcohol.

So, after what appeared to be her rock bottom with the the dissolution of the then skeletal singer’s marriage, she made it like Whitney Houston and retreated to rehab.

Winehouse was set to stage a comeback tour, sadly her concert in Belgrade over the weekend was a disaster. She slurred through songs and wandered around the stage like she was lost, and even threw a shoe at the booing crowd.

The next morning the city’s newspaper called the show “the worst in the history of Belgrade.” Ouch.

It’s time for some empowerment. Bitch + Animal, anyone? Bitch has just released a video for ‘Pussy Manifesto’ covered by Bitch. Wondering what’s new with Animal?

When it was first reported that Megan Fox wouldn’t be returning to Transformers for the 3rd film, a source at Paramount told reporters that it was because Shia LaBeouf’s character Sam was going to be moving in a new direction and it was better if he wasn’t tied down. Because he really needs to focus on him right now.

Well as it turns out that may not be the case. The announcement that Fox and the Transformers franchise would be parting ways followed on the heel of Fox stating in an interview in which the bisexual starlet compared director Michael Bay to Hitler and Napolean, adding, “…[Bay] wants to create this insane, infamous mad-man reputation.

He wants to be like Hitler on his sets, and he is. So he’s a nightmare to work for but when you get him away from set, and he’s not in director mode, I kind of really enjoy his personality because he’s so awkward, so hopelessly awkward. He has no social skills at all.”

Hold on to your hats, apparently comparing your boss to genocidal dictator is not good for your career. Who knew? In a recent interview with The Daily Mail, Bay was asked why Fox was fired and he said, “You know the Hitler thing…Steven [Spielberg] said, ‘fire her right now.'” Bay did. Oopsie.