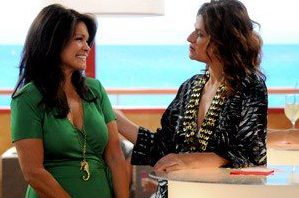 The gay icon makes her latest guest appearance playing the other half of a lesbian couple.

Sandra Bernhard played one of the first lesbians many of us saw on TV when she starred as Nancy on Roseanne. Since then she’s remained close to our hearts and before our eyes, performing her stand-up, putting out albums and making appearances on countless of films and TV shows. A true gay icon, Bernhard constantly stands up for the community and campaigns for LGBT visibility with the best of them.

Her latest venture onto the small screen is a new episode of TV Land’s Hot in Cleveland, where Bernhard plays a lesbian couple with Laura San Giacomo (Just Shoot Me). Curve caught up with Bernhard to hear what it was like working on the show.

She told us, “I had a great time. I’d actually gone to the premiere of the very first show a couple years ago and I met all the ladies and they were all so sweet and really cool and welcoming and it was a show that I knew I wanted to do because it was keeping with the sitcom experience I had on Roseanne and I’m very comfortable in that format.

They came up with a character – it’s a small little part, it’s a fun snazzy part – but they were so great, I loved it. I had a ball. “

For those Sandra Bernhard fans (who isn’t?), she’s starring in a few live shows this holiday season. You can catch her in Columbus, Ohio at Axis on December 16th, in New York City at Joe’s Pub December 28th to the 31st, and in Philly at The Painted Bride January 10th-14th, 2012.

Watch the pages of Curve for our full interview with Sandra, where we talk politics, style and more.

Bernhard’s episode of Hot in Cleveland premieres December 7th, 2011 at 10pm. Here’s a sneak peek of the episode to get you ready;