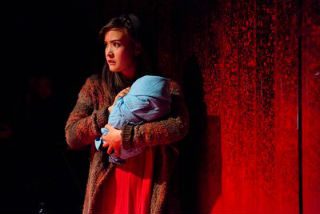 I discovered a child’s world and was happier for it.

Place four people in a room and ask them to agree on which artist to award a  $20,000 art grant and you will see many disagreements unfold. Place four people in a room who have hidden objectives, selfish motives, standing grudges with each other, and mix in racial and cultural politics war, and you will have either a deep drama or a hysterical comedy. In The Most Deserving it is decidedly the latter. Veanne Cox's multi-layered anxiety in the role of Jolene Atkinson created a whirlpool into which the ambitious art professor (Jennifer Lim), nascent self-entitled artist (Adam Lefevre), and disgruntled husband (Daniel Pearce) find themselves sucked in and spit out. Under Shelly Butler's sharp direction and Catherine Trieschmann's tight script the cast didn't miss a beat and showed that the business of art is a funny thing indeed.

The Mysteries dramatizes Biblical events rom Adam and Eve through the Accession of Mary and into the apostle-drama of the Peter/Paul kind. Perhaps more impressive than the scope of the story is the fact that the production exists in the first place. It is six-hours long, with both a dinner and a desert break. Still, a long commitment from the audience. The scale of that undertaking is immense and it is executed with ease. The play itself was a conglomeration of 50 short pieces by over four-dozen playwrights, who (mostly) stuck to a consistent set of circumstances. Incredible. These fifty short plays were then diligently crafted by director Ed Sylvanus compelling  and visually interesting story. A massive undertaking. The hospitable and enthusiastic cast of 54 work for free, six hours a day, five days a week. That's commitment, and impossible in a union theater. The size of the audience was small which created a wonderfully intimate environment. Bravery on the part of the producers. If you get a chance to see this play you'll find more miracles than the ones they represent.

When presented with the opportunity to see a complicated poem set to music I paused: This could be one of those theatrical experiences where you feel the walls caving in and the air suffocating.

In the hands of Rachel Dickstein, director and Heather Christian, composer, The World is Round defied my expectations. I found myself planted into the mind of a child. We sailed away together on a journey to place a blue chair on top of a mountain. I felt the anxiety of Rose, played beautifully by Kristen Sieh, who battled her own inner and outer demons to get to her goal. Her energy and dreams were almost bursting through her skin, and the audience rooted for him almost immediately. Rose was not the average girl and you sense that some of those demons originated because of her isolation in being different. It's a lonely, personal journey — at times thrilling via aerial choreography– that Rose must go on to get to the top. When she finally did succeed with a simple "And I am there" it was heartbreaking and inspiring at the same time. Rose's friends, played by Blake DeLong, Hannah Heller, and Grace McLean were perfect counterpoints to Rose's anxious striving.

The creative team brought Stein's dialogue to life in a way that highlighted it's genius — the metaphors, the repetitiveness, the non-linear thinking. This is how children think. Stein, Dickstein, and Christian understood that. Without Ripe Time's dramatic staging I doubt I would have ever discovered Stein's text and if I did I doubt I would have made it through to the end of the book. Through The World is Round, I discovered a child's world and was happier for it.