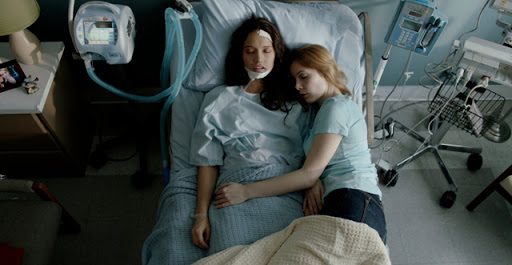 Quiet, at a little over 30 minutes, is one of those films that gets in your emotional psyche and doesn’t let go.

It’s inspired “by the true story of Janice Langbehn and Lisa Pon” who were in Miami, FL preparing to take a cruise with their children.

Pond collapsed and was rushed to Jackson Memorial Hospital where her wife and children were not allowed to see her even though they were legally married in another state. Florida would not recognize their marriage, and President Obama had, as yet, not put into place hospital visitation rules for hospitals who receive federal funding.

Quiet opens with Ali (Susan Graham) checking in at the nurses station at a hospital (we don’t know where) to see if there’s been any change in “Sam” (Jaclyn Betham), her wife.

Ali has been posing as Sam’s sister in order to be able to be with her in the hospital and make medical decisions for her. The film switches between past and present, showing us how Ali and Sam met, their friends, and how they arrived at the place where Sam is on life support.

Nurse Mel (Cocoa Brown), the main nurse who cares for Sam, figures out the relationship and let’s Ali know by a wink that she’s OK with it. However, when Head Nurse, Lucy (Caroline Bielskis), comes in the room and sees Ali sleeping with Sam, she puts two and two together and has security come and remove Ali. She also informs Sam’s physician, Dr. Downey (Tom Lommel), and he removes Ali’s visiting privileges.

Nurse Mel gives Lucy a dressing down even though Lucy is her boss and threatens to fire her. She later helps Ali get in to see Dr. Downey so she can talk to him about her wife and what she means to her. She clinches her plea by asking him, “What if this were your wife and you were told you couldn’t see her?”

Quiet is a heart wrenching short film that has moments of comedic relief, which are needed with such heavy subject matter.  I’m still thinking about it days after watching it.