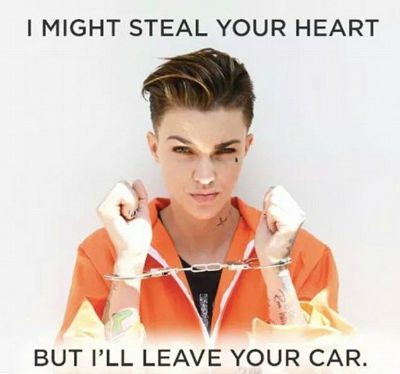 The Aussie household name is set to take over OITNB in Season 3.

I'm just going to say it…

You all know what OITNB is!

If you don't… well you can thank me later – because you'll be binge watching seasons one and two over the next 24 hours. (You're welcome.)

Now let me tell you, if you don't know of this Aussie LGBT Icon then prepare yourself (like Piper and Alex) for the latest lustworthy inmate to hit Litchfield Prison in Orange Is The New Black Season 3.

A lot of people have been waiting for this next installment and now quite a few are drooling with excitement after Netflix announced Rose as the newest addition.

Just because it is totally necessary… here is another picture of Rose, a still from her recent short film Break Free, where she is downright sexy – and wet.

I had a chance meeting with Rose once upon a time. It was amazing and although she is a tiny package she is sure to pack a punch and tug on the hearts of viewers in this next season.

This is most definitely a series you will want to tune into in 2015!

Here is the Youtube clip Ruby Rose recently posted to her Facebook where ET feature the trending news that has taken OITNB lovers by storm.