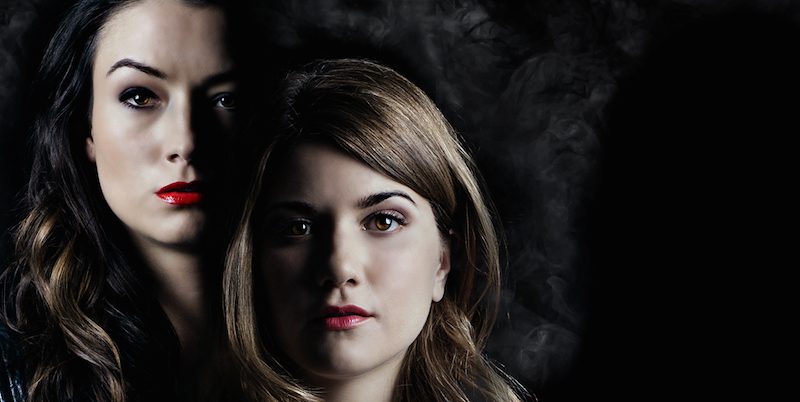 The Carmilla girls, Laura Hollis (Elise Bauman) and Carmilla Karnstein (Natasha Negovanlis) have seen some rough times over the series’ three epic seasons on the KindaTV YouTube channel, but through all the heartache, battles and quirky sentiments, it was obvious that these two were meant to be together.

I was fortunate enough to hang with the Carmilla ladies and discuss the release of The Carmilla Movie, where they reprise their famous roles.

The film begins with the dynamic duo in their cozy relationship five years after they vanquished the apocalypse and Carmilla became a bona fide human. So what are they doing in those five years post-earth ending?

“They finally get to see Paris,” says Negovanlis. “Once it was all said and done they got to travel. Carmilla also became super supportive of Laura’s career. She’s just enjoying human life.”

During their romance, Carmilla begins to feel the urge for blood again, and the prospect of revamping becomes a reality. Negovanlis says, “She begins to feel what an addict feels. After all, she was a blood addict for three hundred years.” Bauman adds: “It starts out very bright-eyed and bushy-tailed. You can see Laura shift to experiencing actual fear.”

The Carmilla Movie has taken on some exciting new endeavors. If you caught the trailer you will notice changes in scenery, action, and ball gowns!

“They were remarkably comfortable to wear,” says Negovanlis. “There was, however, a bit of a power struggle as to who was leading.”

The film also stars Dominique Provost-Chalkley, known for playing Waverly Earp on Wynonna Earp. This time she plays Ell, Carmilla’s centuries old ex-girlfriend who’s come back to clean up loose ends. She also gets to show off her sexy, authentic, British accent. “This isn’t a love triangle,” says Bauman. “Ell doesn’t try to sabotage their relationship. She’s trying to figure things out from where her old life left off. Laura and Ell’s characters sort of mirror each other in a sense.”

Badass female leads, masquerade balls, perhaps a fight scene or two and some sexy lady-loving action. The Carmilla Movie is the whole package.