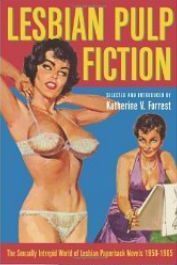 When beginning a journey into the world of Lesbian Pulp Fiction, it may be difficult to know where to start, as the vast number of books is somewhat overwhelming. With this in mind, a good place to begin would be ‘Lesbian Pulp Fiction’, an anthology edited by the well know lesbian fiction writer, Katherine V. Forrest. The anthology includes chapters from twenty-two pulps selected by Forrest and includes iconic writers such as Vin Packer, Valerie Taylor, and author of the Beebo Brinker series, Ann Bannon.

However, I would state that the introduction to this anthology is as important as the novels included, as it details Forrest’s own relationship with Lesbian Pulp Fiction and what it meant to her. The importance of lesbian representation in the media is still important to our community today, however in 1950’s America, where lesbians and gay men faced unrelenting prejudice and oppression, the need was greater.

Lesbian Pulp Fiction played a three-fold role in these times; it allowed audiences to enjoy the titillation of the lurid cover art and lesbian themed content, whilst keeping an underlying position of morality to warn against lesbianism. The lesser known role however was how these books reached out to women experiencing same-sex attraction and who felt utterly alone.

Forrest discusses the importance of Lesbian Pulp Fiction in creating communities and sowing the early seeds of the Gay Rights Movement. However, she also notes how these stories were attacked by feminist audiences in the 1970’s for being damaging stereotypes of lesbian women which strengthened the prejudice they faced from a large portion of society.

Each pulp chapter included in this anthology has an introductory page and picture of the front cover art. The cover art of pulps, as mentioned earlier, is as important as the content of the texts, as this demonstrates the hypocrisy of the times. Pulp cover art is an extension of the famous American pin-up phenomenon.

However, where pin-up girls, first marketed at young men, particularly soldiers, were seen as fun and became a huge part of American culture, when used on pulp covers, they crossed a boundary and were used to both entice readers and demonise lesbianism.

Forrest also describes the re-emergence of authors such as Ann Bannon and Vin Packer to new audiences and their celebration of their work. From the introduction to the anthology and her dedication to Bannon in the acknowledgements, it is clear that Lesbian Pulp Fiction had a profound effect on Forrest and her own writing.

What Forrest does best in this anthology is source out a collection of pulps that showcase the variety that was on offer, whilst highlighting that not all pulp was trashy or pandered to destructive stereotypes of lesbian women. Forrest celebrates pulp for what it gave and continues to give to our community. This book is a must-have for any beginner or seasoned reader of the genre.