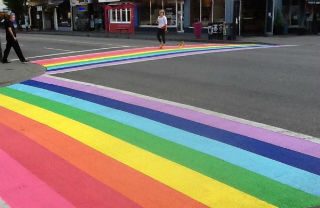 Toronto shows its pride and support for the LGBTQ communities with newly painted rainbow crosswalks.

Pride Toronto recently announced that Toronto City Council has approved a motion by Councillor Kristyn Wong-Tam to fund the creation of crosswalks painted in the colors of the rainbow flag, an internationally-recognized symbol for a broad array of identities including, but not limited to, lesbian, gay, bisexual, transsexual, transgender, intersex, queer, questioning, two-spirited, and allied communities.

The rainbow crosswalks will be permanent additions to the neighborhood streetscape celebrating Pride in Toronto’s LGBTQ communities.

“Pride Toronto is thrilled that these crosswalks will welcome visitors to WorldPride this summer, and will remain a permanent legacy of the event for years to come. We appreciate the support of the City of Toronto for the project, which will bring color to the streets and celebrate the history and future of Toronto’s LGBTQ communities,” said Kevin Beaulieu, Executive Director of Pride Toronto.

“Painting our intersections in Rainbow colors will be the welcome mat that Toronto is putting out for the global LGBTQ community. It will show the world that Toronto is ready to welcome WorldPride to Toronto,” Kristyn Wong-Tam, Toronto City Councillor Ward 27, Toronto Centre Rosedale.