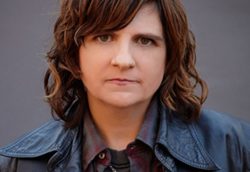 The legendary singer-songwriter sat down to talk inspiration, collaboration and why the lung is just as important as the heart.

While Amy Ray doesn’t play favorites with her songs, she does get sentimental about a few of them.

Her new song When You’re Gone, You’re Gone, off her latest solo album Lung of Love is special to her because it transformed into something she never could’ve anticipated.

What was meant as a rockabilly jam morphed into something much slower and considered, going from a 4/4 time signature in the vain of Tom Petty to adopting the time signature of a waltz. “I’d written it as this kind of The Everyly Brothers cross with a rockabilly song.

And I was very resistant to change but then after we played it and we taped it and we listened back to the tape I was like, ‘Ok, you totally win. This sounds so much better.’ And I can hear it.

One thing I can do is step back. I’m resistant but if I hear the evidence I will totally give in.”

Ray’s solo albums are a collaborative experience, bringing in a trusted circle of musicians, producers and artists like Greg Griffith, Trina Shoemaker, Melissa York, Julie Wolf, Kaia Wilson and others. Collaboration isn’t new to Ray, as she’s been doing it with BFF Emily Saliers for years. They have a band called the Indigo Girls. You might’ve heard of them.

“It used to be that the solo stuff was a really fun way to get my ya-yahs out. I understood it to take a backseat to Indigo Girls but they’re equally weighted and I know it so I respect that. Indigo Girls is a whole different kind of collaboration.

Ray writes her solo work while on tour with the Indigo Girls, and vice versa. She was gravitating towards thoughts about the lung years ago, before that album paying homage to the same human organ was released in 2009 – Florence and the Machine’s Lungs.

It was released after Ray had written Lung of Love, but the song was still kicking around her studio when Florence and the Machine’s album was released. “I’m a big Florence and the Machine fan,” she said, “and when I heard [Lungs] I thought, ‘Oh crap.’ But then I tried to look at it a little bit of the tipping of the hat with the synchronicity, you know? Because I like what they do a lot.”

When Ray wrote Lung of Love she struggled to find music to fit the lyrics. Though people so often gravitate towards the heart, she thought of the lung as a the overlooked organ.

The inspiraton for the new album is heavily rooted in the experience of the body, as both a limiting force and as the place that holds the human experience. “I think I’m caught between what you want to do in life and what you’re limited by,” Ray said.

“That can be not being able to be in two places at one time, that can be not having the energy to do everything you want to do; it can be when you lose your voice and can’t sing for a week and how that feels. I think I was just dealing with how I hate the limitations of the body because my ideas and what I want to do and my spirit feel bigger than that. I think a lot of people struggle with that and it’s like our humanity that holds us down.”

Ray chose Lung of Love as the title of the album because she knew she had to find a thread that held the songs together in some way. She thought that breath could be the only answer.