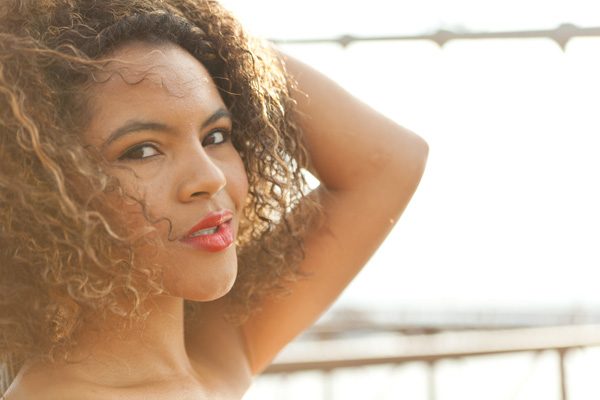 Bisexual poet Yazmin Monet Watkins creates her own labels and loves without limits.

Even though Yazmin Monet Watkins identifies as a bisexual African American woman, she isn’t one to attach herself to other people’s labels—and isn’t afraid to coin her own.

When she found that her new book, Love Without Limits: The Bi-Laws of Love, didn’t fit into an existing genre, she made one up. She calls her multidisciplinary project “poetography,” because it showcases not just her poems but photographs by several photographers from all around the country.

An artist across a spectrum that includes acting and writing, Watkins describes herself as someone who feels deeply. “I’m just a human being, trying to document this experience of being human,” she says.

Watkins does everything she can to infuse life into her work, and says that when it happens she can really reach people. “I’m a spoken word poet, so a lot of the poems that are in the book I also perform. I’m working with a couple filmmakers to make more poetry-music videos. There’s so much room for exploration and creativity and growth.”

Watkins says her poetry is for the masses, and brings it to the street in unexpected places. She says it’s a way to break down barriers and challenge stereotypes. She once performed at a college that she describes as “very fratty.” The event was called Lady Rush, and it was a talent pageant that doubled as a fundraiser for the senior class.

The college’s feminist collective, which was against pageantry, was protesting the event outside the building.

Inside, Watkins chose to perform her poem “This Is What a Feminist Looks Like.” She says, “It was cool to be able to infiltrate the system and tell my story in a way that was entertaining but also educational…a couple basketball jocks came up to me afterward and said, ‘I can relate to that.’ ”

While Watkins says it is her queer feminist leanings that most often inspire her poetry, her own love stories and her experiences with religion influence her work as well. She wrote the poem “Sunday Socks,” in which she quotes from Leviticus, to deal with the assertion that if you’re gay you can’t be a Christian. “I grew up in a Pentecostal Apostolic, gay-bashing type of church,” she says. “I still maintain that relationship with the spirit of God or whatever, but the poem was a response to that.”

Watkins says it has been a learning experience to accept and be comfortable in her own voice, and to be able to share her message wherever she is. “I think it’s an interesting place, being bisexual, because you’re not fully gay, you’re not fully straight. There have been a few looks where it’s like, ‘Hey, wait a minute, you were with a girl before, what are you doing with a guy?’ Or from the opposite side, ‘What are you doing with a girl, I thought you were straight?’ As corny as it sounds, I love without limits.”

Whether Watkins is at queer events with a boyfriend or at straight events with a girlfriend, she says it means the most to her when people on both sides of the fence remind her that she’s always family, regardless of who she’s dating. (yazminmonetwatkins.com)