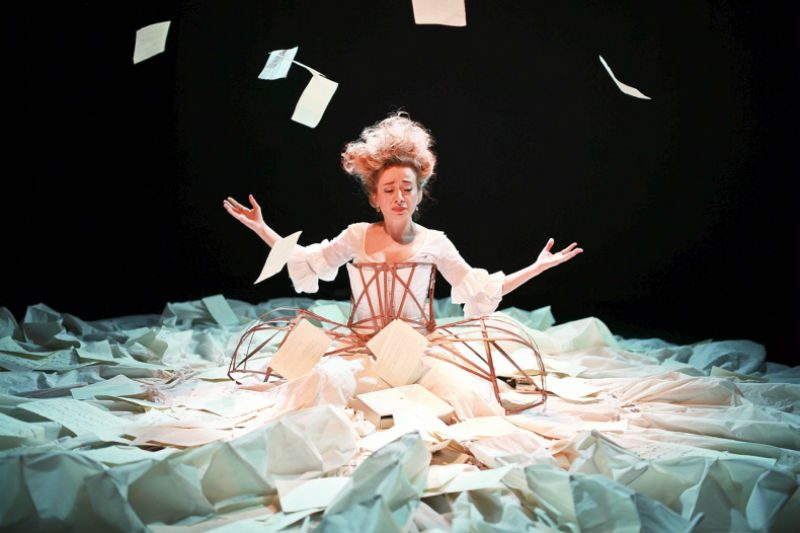 The Other Mozart tells the story of Mozart’s forgotten sister.

Mozart wasn’t the only musical genius in his family. In fact, his sister Nanerl was often thought of as more talented than her brother. For reasons relating to her gender she was forced to stop performing.

While her brother went onto fame and fortune, she was forced to marry a miserable man for his fiscal security. One can only wonder what Nanerl would have composed if she was given the same opportunities as her brother.

Lucky for us Sylvia Milo has brought Nanerl back to life with her solo play The Other Mozart. Milo embodies Nanerl with much grace, charm, and lightness intertwined with deep-seated disgusted for her station. The stage is mostly consumed with the captivating main set piece: Nanerl’s dress laid out across the stage, laden with mementos of her life, and so heavy it requires her to sit for most of the show.

As Milo tells it, Nanerl loves her brother, is happy for him, but longs for some success for herself. Although she was trained to compose, it was never encouraged, sometimes discouraged. Her brother wrote down what he heard in his ears … she also heard music in the air, but never thought to write it down. A reminder of the cultural loss that misogyny and sexism creates.

Milo is bringing The Other Mozart to as many people as possible, including making her way to Mozart’s apartment in Salzburg. She’s currently (and very impressively) working on the German translation. Milo is certainly reaching artistic heights, just as Nanerl could have. You can catch the show in New York City this May and June.