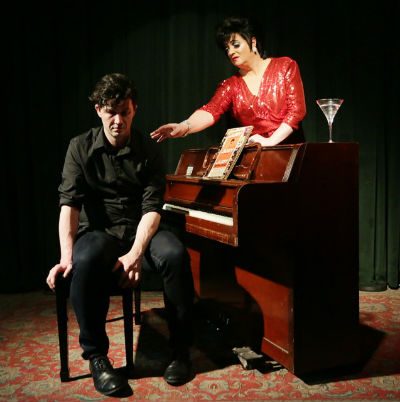 Nobody hated Louis B. Mayer [MGM studio chief] more than I.

On one of my many solitary walks throughout NYC I wandered into a theater called Dixon and saw that they were putting on a show [For the Love of Judy] about Judy Garland. It was created by a writer named MargOH! Channing/BT Shea. How intriguing!

I don’t usually go to public events for fear of being hounded by the press, so I sat in the back row and hoped no one would notice. Why take the risk? Because nobody hated Louis B. Mayer [MGM studio chief] more than I…and Ms. Garland. She was a special talent and completely eaten alive by that evil “gentleman” before consuming herself.

What this clever artist BT Shea did was commendable; he dove into the dark places that I ignore and Ms. Garland took pills to forget. He went there, looked around and paralleled his inner journey to Ms. Garland’s path, noting how she inspired him to be more present (a frightful state, but like I said, he’s an admirable soul) and to accept himself (I don’t even know what that means). Along the way, BT Shea became the drag queen MargOH! Channing. A splendid and sparkling transition!

If you would like to get shivers and certainly entertainment, then follow this show wherever it goes next. Send any comments via homing pigeon to my reclusive hideaway on East 52nd street.

Lauren LoGiudice is a writer and performer based in NYC. Her recent project Garbo Dreams is based on Greta’s last days alone in her apartment. www.laurenlogi.com