I expected to gain a greater appreciation of Carole King when I saw the Beautiful: The Carole King Musical.

I did not expect to fall headlong in love with Jessie Mueller, whose portrayal of the songwriter icon was so refreshingly honest and sweet it made both icon and actress shine.

Music defines this musical, but Beautiful has depth and a narrative force beyond the typical jukebox musical. The songs were fundamental to the emotional core of the piece and integral to the story. The music was also impressive in that I thought several times throughout the show : “What hit song of the 60s didn’t they write?”

The audience got a glimpse into the creative process behind songwriting, especially how so many hit songs were originally trashed.

The moments that defined Carole King’s young career were portrayed with depth, so the audience got to know the characters in their complexity.

The Carole that we saw in this musical was an incredible woman with a can-do attitude and a knack for surrounding herself with good people, perhaps because she was so earnest. She had wholehearted faith in people, was a loyal friend, with puck and gumption that wasn’t overwhelming. Early in the play we see Carole as a sixteen-year old girl who marches in Don Kirshner’s (Jeb Brown) office and sweetly asks to see him without an appointment. She had faced multiple rejections so far but was certain that if he heard her song he would buy it. She talks her way onto the piano and plays her song for Don. He buys it and her career begins.

Carole was incredibly grounded throughout this play and made decisions with her gut without hesitation. Her husband continues to cheat on her. She leaves him. Her old house haunts her. She moves to Los Angeles. She wrote songs that didn’t fit anyone. She sang them herself. This attitude is juxtaposed with her husband and co-writer’s insecurity. Gerry Goffin (Jake Espstein) thought that once they gained success they should change, because somehow they weren’t good enough. Carole knew where the sound came from so refused to budge. Gerry instead sought solace in clubs and other women, looking desperate in comparison.

If you would like to see a musical that leaves you singing out loud with a new hero to emulate then Beautiful is a great bet. 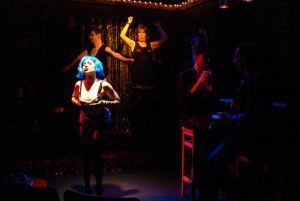 All That is (Wet) Glitter

If you’ve been in the arts community for more than a few years you will quickly notice that the attrition rate is high. I remember interning for Pat McCorkle and at least once a week hear someone in her office say to an agent : “So, XYZ can’t make the audition because he quit the business?”A lot of my friends, however, are still going strong; in some ways show biz is a survival of the strongest and fittest. If you can take the (inevitable) hard knocks and get back in the ring, then you will most likely have success…and have my respect and admiration.

Lucile Scott is one of those friends. She’s been writing and creating work on stage for seven years. Incredibly impressive. I was lucky enough to be part of one of her shows V Love, one of her collaborative projects, a few years ago. Two weeks ago I saw her most recent show Wet Glitter, her third full-length theatrical piece. Wet Glitter is a musical that centers on a deserted town famous for uranium mining.  It was a heart-felt story about how economic collapse, greed, and regret cause people to act in ways that surprise even themselves. The musical was multi-faceted and rocked from the first to the last minute. The characters were well-developed and had several dimensions each.

I picked Lucile’s brain for more bits about her secret sauce for creating at a clip:

What was your inspiration for Wet Glitter?

Wet Glitter was inspired by many things. First, I’ve long wanted to write something juxtaposing the late 60s/early 70s with the 90s that looks at the role of music and disillusionment. Second, a few years ago I read an article in the New Yorker about the uranium mine in Paradox Valley Colorado and how it was used to mine uranium for the Manhattan Project in WWII, was thriving in the 60s fuelling nuclear power, and then was shut down in the ’80s after Chernobyl and the resulting backlash to all things nuclear. And so by the 90s, when the play is set, the town was shutting down as well. It seemed like a good way to look at those times. And Lazarus, the dog, was inspired by my actual dog, Vinni. A theme of the play is also creation and destruction and how forces of creation and destruction are perhaps the same and both part of life and progress, and uranium seemed like a good a symbol of that.

What are your thoughts on continuously creating writing projects?

Well, I always like to be writing or working on something, otherwise life just doesn’t feel right and I get cranky. And so I guess I make sure it’s a priority in terms of how I spend my days. But I don’t finish everything I start. For instance, I have about 100 pages of a lesbian love story zombie apocalypse young adult novel I never finished. I think for me the key to seeing it all through is great collaborators who help inspire me and drive the project forward. And that was certainly the case with Wet Glitter. Co-director Stella Powell-Jones read the first draft and has been helping me develop it since and head composer Julia Weldon has also been hugely instrumental. And of course, the final product involved the creative input and vision of a gaggle of ridiculously talented folks, including co-director Eddie Prunoske, who I am blessed to have had contribute to the show.

What’s next for Wet Glitter?

That is TBD! This production was a workshop production to help us iron out some kinks and find out what the show really is and could be. The idea is to now get a bigger, better production. But however that shakes down, Wet Glitter will be bigger and better and bolder when you see it again! With more puppet action and more spectacular special effects and stage magic caused by the uranium. Also, we are planning to record the soundtrack.

How do you know when it is time to stop writing and start pushing for a piece to be staged?

I don’t know that I am the best at knowing that. I generally push for a piece to be staged from the get go and need other people to help me make sure it is fighting shape by the time it goes up. But I work well under pressure and with deadlines, so having to quickly get something ready for an impending production really helps me make it better. That said, I have certainly put up some shows before they should have been, but I think that is all part of learning. I never studied theater or playwriting and learned by doing and actually staging a production has been the most important part of my learning process to date. And thankfully, I am lucky enough to live in NYC where there are so many festivals and other opportunities to get work up for at least a short time for cheap.