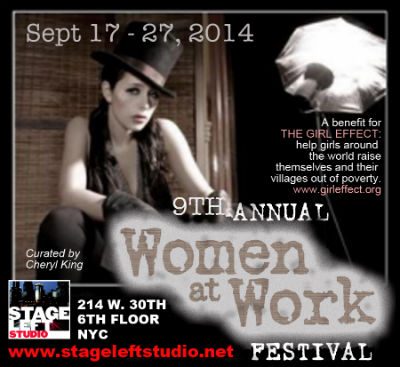 With the incredible abundance and diversity of entertainment options, all producers are asking themselves: “How can I get people to watch?”

At all levels and in all mediums, there is a resounding sense that obtaining an audience is harder than ever. Those who survive for more than one or two years usually have an alternative idea. Cheryl King was one of those people. For many years Cheryl King operated Stage Left Studio with the intention to present quality work in an environment conducive to community.

Cheryl built it and the audiences came.

Some time ago, I met Cheryl King on the set of “All My Children” and we clicked immediately — two sassy ladies met and connected indeed. At that time Cheryl was in her first few years of running Stage Left Studio, a small theatre that she created which was dedicated to solo performance.

Within the next few months Cheryl and I produced an event together which I MCed for her Left Out Festival, which was dedicated to LGBTQ theatre.

Throughout the years I’ve been a member of the Stage Left community and have been wowed on many occasions: Cheryl is damned dedicated to her work. She IS Stage Left — she created it with her own hands and she helped it grow with her wit, charm and good taste. The New York Times  called her “the matriarch of Off-Off Broadway, which is completely accurate as Cheryl is indisputably the captain of her ship. For many years she provided a space for fledgling and experienced solo performers to meet and inspire each other.

Many collaborations came from the environment that she created. Cheryl fosters countless artists and at the same time demands their A-game; the quality of work presented at Stage Left Studio is high.

This is Stage Left Studio’s final season and you will want to check out the final installment of the Women at Work Festival, which runs September 17th through 27th and features performance by and about women. This year’s selection investigates gender as it intersects with mental illness, nationality, class, race, parenting and sexual assault. Some selections you may want check out are: Cheryl Smallman, Dreamless; Ronna Levy This gonna be on the Test, Miss?’, The Script  Tim Collins. Proceeds benefit Girl Effect. For more information and tickets please visit

In the following Q&A with Cheryl King you’ll learn about what it takes to build a strong theatre and community, as well as why she chose to make this season her last. For those who know Cheryl, it will be incredible to see the list of hats she wore, for despite the intense amount of pressure Cheryl has running Stage Left, she is always in a good mood with something positive to say that will give you that boost you need to create and perform your best! Stage Left Studio and Cheryl King both are irreplaceable.

Women at Work – what inspired you to create the festival?

This was back in 2006 when the only performing festivals in NYC were the NY Fringe, the Midtown International theatre Festival, and the Estrogenius Festival.  I was (and still am) the artistic director for the solo show portion of Estrogenius, called Sola Voce. We got a lot of submissions and only had a few performance slots to offer, so I decided to create my own festival to give the women who didn’t get picked for Sola Voce an alternate place to do their shows. Since the Estrogenius mission is to provide opportunities for women, they were in total agreement with my idea. I had my brand new performing space and being a solo show artist myself, wanted to make opportunities for others solo show artists, in particular, female solo show artists, who are underrepresented in theatre. I made the festival a benefit for girls around the world, so that we could serve others in addition to developing our own work.

What has been part of owning and operating your own theatre?

What hasn’t? I do everything. I am now in my 10th year of operation, and am in my second space (I created the festival when I was at 438 W 37th Street, and now I’m at 214 W 30th Street) and in both build-outs I had to hire builders, and also did a lot of the work myself. I created the systems, hired the board operators, bought and installed the equipment, did the scheduling, ran the box office, cleaned the space, made the curtains, bought and framed the artwork, marketed the shows, built the website, promoted the artists, directed and wrote shows, curated the festivals, designed the lighting system – I learned how to do every single thing here. I also had help from some wonderful, talented people – Darrell Hell, TC Corwin, Bill LoCasto, Ellen Rosenberg, just to name a few. Dozens of people have helped out – with painting, building, moving, designing. It’s been a labor of love for all of us. But for the day-to-day stuff, I’m basically a one-woman operation.

What surprised you about the journey to own and operate your own theatre?

I didn’t realize what a strong community would grow around the space. I expected friendships to grow and blossom, but I never knew how much bonding would occur between us all. And I never knew that Stage Left would acquire such credibility. We have had three Drama Desk nominations for Stage Left shows – Frank Blocker, Best Solo Show for Southern Gothic Novel; Juliette Jeffers, Best Solo Show for Batman and Robin in the Boogie Down, and Tom Gualtieri, for Best Unique Theatrical Experience for That Play. We got voted “Best Sexy Theatre” by the Village Voice for my monthly erotic cabaret “Forbidden Kiss LIVE” which has played every month for nearly nine years. And I was called “the matriarch of Off-Off Broadway” in the New York Times.

What was your biggest challenge in starting “Women at Work”? Stage Left? How did you overcome them?

The biggest challenge for me is the biggest challenge for us all – paying the bills. The second biggest challenge is connected to that – finding audience and people to rent the space. And I am still struggling with that. People in NYC work very hard and long hours, and many of my friends and associates are working two jobs – their art job and their money-making job. That situation leaves them very little time and money to go to plays, or to finance their own shows.  And with the current proliferation of Solo Show Festivals, attracting audiences gets harder and harder. Friends and family get invite-fatigue, and the public at large have so much to choose from, it’s hard to get their attention. Not to mention the fact that hard-working New Yorkers often simply want to stay home and watch TV.

What’s your favorite story of a success at the theatre?

It’s my Left Out Festival, a celebration of LGBTQ artists. It is held every April and is a benefit for Bailey House. At first most of the writer/performers were gay, and in the second year we had a few lesbian artists, but the B,T and Q artists had not yet found out about the festival. However, this past April, our 7th Annual Left Out Festival, we finally had representation from all the letters. I hosted a T-Party, a sort of talk-show and documentary that featured transgender clients from Bailey House, who I had worked with for eight weeks, and Ashley Lauren Rogers, a transwoman whose play was featured in the festival. I shared audio clips from my workshops with the Bailey House clients in which we had discussed issues of importance to the transgender community, and included clips from prominent transwomen like Laverne Cox, Geena Rocero and Janet Mock. We had a big audience who loved the show and participated in lively discussion about all the topics in my presentation. We followed that up with a wine reception in the lobby. It was a big success.

Can you speak a bit about the community that formed around Stage Left?

I recently went back through my calendar to make a list of all the “Stage Left veterans” – people who had presented runs of their plays and solo shows here – and it was about 100 people. Some of them were people from my writing workshop, some found me or my space on the internet, and a lot of them showed up first as members of the audience, friends of the performers, who loved the space and the energy, and contacted me later about putting up their shows. And then there’s a group of several hundred who have been participants in my festivals. Many of them came back to do extensions of their shows, or to do their next solo shows. I have several friends – Frank Blocker, Joe Hutcheson, and Tom Gualtieri – who have done several different shows here. The community includes more than writer/actors, too. There are directors, techies, sound and light designers, box office help and, of course, the audience. Stage Left now has a mailing list of over 6000 and many of the people on that list are regular attendees, who have decided that the Stage Left imprimatur means the shows they are buying tickets for will be good ones. I am proud that I am the artistic director of a theatre where that is true.

It’s a slow accumulation. You have to prove yourself in NYC. But if you make quality important, people talk about it. I made sure the space was well-equipped, clean, and pretty. I upgraded my lighting and sound system on a steady basis for years. I bought a top of the line projector, and keyboard. I cultivated relationships with the press, and with PR firms. I was helpful and accommodating, and I hired good people to run the box office and the sound and light boards. I encouraged people who were loyal and trustworthy, and that paid off. If you are good to people, they usually want to be good to you. Sometimes that wasn’t how it turned out, but I only got burned a couple of times in the last nine years, and I think that’s a reasonable loss factor.  As I said, I had a lot of help. And I worked 40-60 hours a week. I still do.

How consistent were the people that were Stage Left regulars?

CK: I created Forbidden Kiss LIVE within the first year I had the space, and the company of actor/writers who performed in that show were regulars. The ensemble changed through the years – but I have been in every show, TC Corwin has been in all but one or two, DeeAnne Gorman joined us a few years ago and has been a steady part of the show. In the past few years, we have enjoyed working with Frank Blocker, Gaby Gold, Bella da Balls, Elza Zagreda and Brendan Wahlers. I have written a number of sketches that include two or more of the company, including Podcasters, in which the premise is that voiceover artists are in the studio recording voiceovers for sexy films. TC Corwin and I do most of these together, but I have written sketches for TC and Brendan, or TC and Elza and Frank. We also did Sexperts, an improv sketch where we took questions from the audience for our panel of “experts” played by various members of the company.