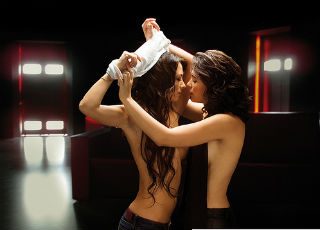 CHAOTIC AND ENTERTAINING COMEDY WHICH ORIGINATES FROM GIRL SEEKS GIRL”

THE FILM
OUR FILM IS A CHAOTIC AND ENTERTAINING COMEDY WHICH ORIGINATES FROM “GIRL SEEKS GIRL”, AN INTERNATIONALLY ACCLAIMED ONLINE SERIES. BRAZIL, ITALY, FRANCE, CHINA… NO MARKET WAS ABLE TO RESIST THE FRESHNESS, ORIGINALITY AND HUMANITY OF OUR CHARACTERS, THEIR WAY OF RELATING TO EACH OTHER AND WAY OF SEEING THE WORLD.
Plot Synopsis
Life smiles on Nines in Miami. She is professionally successful as an illustrator and has a stable relationship with Rebeca. But her whole world is torn apart when it is discovered that she has not met the delivery deadlines for her next project and she has dedicated herself to seducing any attractive woman she has met in the state. In the space of one day, Nines finds herself without money and without a girlfriend.
The time has come to return home, and above all, the time has come to win the heart of Carmen, the heterosexual she has been in love with since she left Spain.
But Nines chooses the wrong time to do this. Turning up unannounced at Carmen’s house, Nines interrupts the “First Period Party” in honour of Candela, the daughter of Monica, the woman who Nines left pregnant on the day they were to be married. And not only that… also present is the woman known as “Sofía please”, the comics publisher to whom Nines owes a significant professional debt. And Javier, Carmen’s ex, with whom Nines always competed, and his 37-year-old pregnant wife. And Fran, the gay friend with a hetero mindset, whose girlfriend Linda is a spectacular transvestite. And Marta, who has finally won over Rai, the neo-punk of her dreams, on the same day that she receives an unexpected visit from her mother… Girl Gets Girl, a party, a daughter, many girls and something else.
Girl Gets Girl Promo