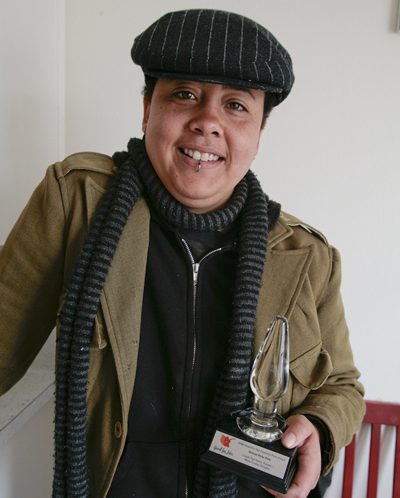 The woman behind some of our favorite adult films, made for lesbians by lesbians, talks male bodies, the industry and why we’re so damn hot.

Its been five years since we caught up with Shine Louise Houston. Back then, she had just released her first adult film: Crash Pad. Since then, Crash Pad has become a series, she’s won awards, and she’s started a new project.

Hey Shine. Its been too long. Catch us up to speed.

Well, I started working at Good Vibrations and I’ve come full circle because now I’m being distributed through Good Vibrations. That’s been a long trajectory.

We’ve got four features under our belt and two websites. Last time I talked to Curve I had just made one movie so now we’ve done many more.

Masculine appreciation isn’t something we hear too much about.

That’s a new thing that I’m working on right now, which is kind of a site for male-bodied, male-identified folks. There were a lot of people who applied to the Crash Pad series and I really want to work with them, but the arena that we’ve created through the Crash Pad series and what Crash Pad is known for wouldn’t work so I decided to start up a project where I could let myself be a little more creative and appreciate male bodies, which is something I don’t always get to do.

It is really fun and it’s new for me and hopefully it’s a new way of looking at male bodies that hasn’t been done.

Have you gotten any backlash from the lesbian community for focusing on male bodies, even though it is through a queer eye?

I’ve gotten some people who don’t particularly like the identity of queer and they say you don’t speak for us, you’re corrupting the lesbian culture, and all that kinds of stuff. I tell those people, I’m one voice.

This is my perspective. I am speaking out and representing the community and yes, I am one voice and these are my politics.

Really, it’s about the concept of queer and queer sexuality and working outside the norms of the binary, even that binary within the gay community…whether you’re straight or you’re gay.

Yeah. The pioneers like Annie Sprinkle and Joani Blank really cracked the ground for people like me and helped to create an atmosphere we have now.

I was building the site and researching web developers and I said, ‘We’re an adult site.’ They said, ‘Oh! We can’t work for you.’ I always forget that I live in a small bubble.

What does your work do for the queer community?

It creates empowerment by saying yes we are beautiful, we’re an art form, we’re not all gym bunnies, and that’s OK. [Laughs] We’re not all super high femme and all this kind of stuff.

It’s like, hey, let’s normalize this. These are queer bodies. And hey, we can be just as hot as the models in Penthouse.

It’s empowering when you can see yourself reflected in an image. If it’s powerful and sexy you might think, wow, I really always wanted to identify with that but I can’t because my body doesn’t look like X.