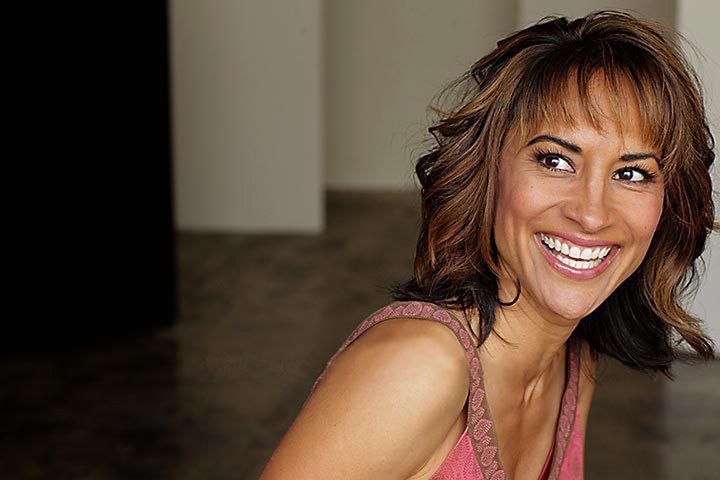 One of our favorite lesbian actresses talks about her new film making its round on the festival circuit.

When I catch up with Michelle Bonilla she is at her home in Los Angeles applying sealant to her patio. She is just as vivacious and passionate as you’d expect her to be but perhaps more so this evening as she is just a few days from her new film Slip Away premiering at OutFest.

It is her first film to give her the “written by” credit and she tells me that screening at OutFest is especially poignant as she’s from Los Angeles. “It means more,” she tells me. “This is my ‘hood.”

Bonilla has been on our screens for years, from her recurring role on ER, the Klingon Bu’Kah on Enterprise, as well as appearances on Saving Grace, Criminal Minds:Suspect Behavior, and the film Getting to Know You, playing opposite Elizabeth Keener.

Bonilla’s Slip Away is the story of a couple, Selena and Jane, who are struggling to find how to love one another around Jane’s addictions with drugs and alcohol. The film asks, “How far does one go before they simply slip away?”

Hey Michelle. Tell us about your film.

It’s based on what actually happened in my real life. It took me about six years to write it because I was so close to it.  The truth of the story is that I was actually in the character Selena’s shoes so I decided that I might as well go ahead and play the addict to not only kind of give myself a sense of completion but also to give myself a challenge and try to give this Jane some compassion.

I didn’t want it to be a, let me beat you over the head with a story or a cliché. I wanted to have these two characters very complete in themselves.

In writing about and then playing Jane, what did you learn about her?

I learned to have compassion for the disease of alcoholism and addiction. But also I can understand the confusion one goes through.

Who are you loyal to? Yourself? Another person? That lucrative something else? Who’s driving you? There’s a lot more that I understand from playing her.

In whatever I try to play, I always try to find that something that makes the character more human and not just this thing, this bad person, the protagonist or the antagonist, you know? I like to add some depth to my characters.

The film has screened at festivals across the world and has gained a fair amount of notoriety. Did you think your first writing effort would be such a success?

I really wasn’t thinking that way. What I wanted to do was to be able to make the film I wanted to make.

I’ve been blessed to work with really fantastic people in my career so I knew the type of acting level that I wanted. I wanted it to be the best it could be, that’s why it took me so long to write it.

We also had to cast Selena’s character, which was the hardest thing. I wanted to make sure that a Latina filled the role because, in the end, I wanted to have a positive portrayal of a Latina in the picture.

I felt a sense of obligation to who I am. And even though I portrayed an addict I didn’t want the Latina community to be like, oh OK that’s the only representation that this Latin girl has in here.

I wanted there to be a positive one. So I needed the actor to be Latin to be true to my story. It was hard.

We had a couple names attached to it but then they went off and got series. So I knew that by working hard on this, that by taking my time with this, making sure I found the right director and the right producer to help me make this, that it would be a success.

In an interview with SheWired you said, “It was very important to me that the actor we got to play Selena be Latina because it’s very rare that we see a Latina (in film) making a positive choice – where she’s not the victim.” Why do we see that so often?

And then—poof!—add the accent and it sells. And it’s just now that we’re finding these great producers in television who are starting to bring characters to life and filming them with actors of color whether they be Latin or black, some kind of flavor, and have them be a character, not just a “Fuentez”.

How has the Latin community responded to the film?

I just had my first article in the community. They’re a little slow to accept. I submitted the film to a number of Latin festivals and some of them were like, “Thank you, we regret…” You never know.

You never know why you get into one festival and why you don’t. Even with interviews it’s very rare. The big news was that Ricky Martin came out.

Then do you hear anything? I don’t hear anything on Telemundo if I watch it any more. They really don’t talk about it.

They talk about some young Latina girl who’s on a Disney show or Nickelodeon show that bought a new sweater. Top news! Top news!

It’s like, wow, there are so many more people who are taking risks and making quality pieces of art, whether it be film or television, and they’re making a story.

Your fiscal partner is the Los Angeles Women’s Theatre Project. What has it been like working with them?

They do something extraordinary. They support women in the arts. This is their first venture into film. They supported this project and have been so wonderful.

We accepted donations in able to make this film and in return we were able to give the people who donated a bit of a tax write-off. It was a wonderful collaboration.

They’ve been very helpful about getting the word out. They’re just wonderful people who support women in the arts and I thought that was so hot.

Well, quite often it’s the community getting behind these films that helps them get made.

Well, I was gonna make it hell or high water anyway.