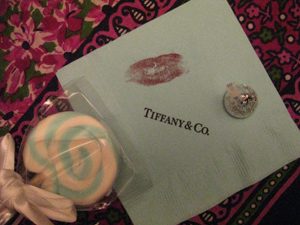 Tiffany’s featured a candy table with 50 different types of food-like objects that will prompt diabetes.

As soon as attendees came off the elevator they had a wild look in their eye; “Where’s the caaannndddyyyy???” People rushed for the candy table with only a cursory look at the jewels and waited 30 minutes for one small bag of free candy. When they got up to the table customers stuffed extra candy into their pockets like the staff would not notice that they were being gavones. From where I stood the event was more like Fashion Night Out for Free Crapîthan a Fashion Night Outî to expedite increased sales.

I designated myself the ‘candy bowl restocker’ because then I did not actually have to physically deal with or serve anyone. When the crowd got out of control the elitist part of my brain turned into a pompous English colonial and told me, ìLet this classless filth serve themselves.î The colonial then turned into a catty fashionista from Chelsea and assured me: “Don’t worry darling, you won’t ever have to serve people with bad shoes again.”

As the night wore on the line to the candy bar continued unabated. It became apparent that the customers weren’t the only ones trolling for free stuff. After emerging from a bathroom stall after a 20 min self-appointed texting break several salespeople who shall remain anonymous cornered me to demand their share of designer truffles. I didn’t see anything, but truffles were smuggled out in jewelry boxes. If Audrey had been looking through the building that night she would have noticed that other cater-waiters had their own candy trafficking operations going on. Repeatedly I caught a glimpse of a cheap-tuxedo-clad-waiter stuffing lollipops and suckers into their jackets and waist pockets.

The scene at the gig reminded me of the bi-annual-up-to-75%-off Barneys Warehouse sale a week before. The line there was longlonglong and there too people threw out social decorum and self-respect for a cheap deal. As soon as most people entered the store they put on their demon face to knock over everyone in their path to the $65-marked-down-from-$260 jeans. I barely escaped with a pair of Italian leather sandals.

Which brings me to a question that kept coming to mind that night: Where are the people who go to Barneys and Tiffany’s when there is not a mega-sale or free candy? Of course they exist. Most likely eating hors d’oeuvres in full-priced jeans laughing at the lot of us who are investing our precious time creating an illusion that is obvious to anyone who is not trying.