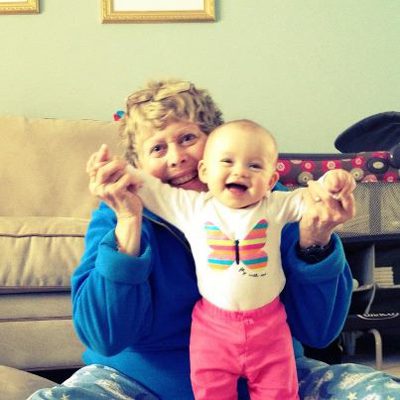 My mother and I haven’t always had the best relationship.

There was always some kind of disconnect between us, especially when she tried to get me to wear clothes I didn’t want to wear. I didn’t understand why she couldn’t just let me be . . . well, me. I vowed that when I had kids, I would never make them feel “less than” for being different. I don’t care whether Maggie loves pink and frilly dresses or if she prefers overhauls and sneakers—I want her to be able to feel comfortable and confident no matter what she’s wearing.

Recently, my mother came up for a visit. She’s a low-maintenance kind of guest. She’ll eat whatever you put on the table and she doesn’t demand to be entertained every second of the day. Instead, she’ll cozy up on the couch and read, take a nap or watch The Weather Channel. She loves movies at night, ice cream and popcorn for snacks, talking about anything and everything, and sharing in whatever is happening at the moment—even if I’m watching an NBA game on television. (“Now, who’s that again . . . LeBron James?”)

She also loves her granddaughter.

It made me warm and fuzzy inside watching my mother climb down onto the floor (which isn’t all that easy for a 65-year-old woman with arthritis) and play with Maggie. She also got to bathe Maggie, feed her, take her to music class with me, and interact with her daily. These are special moments, because my mother lives in Atlanta. She and my father moved down to Georgia six years ago, in order to be closer to my older brother and his family. I don’t get to see them more than twice a year—if that. It’s important to me that Maggie gets to know her grandmother and see her through a different set of eyes than mine.

My mother and I have come such a long way. She cried when I first came out to her. But a month or so later, she became my biggest cheerleader. She’s not afraid to ask me questions about my sexuality, to learn and gain a better understanding, even to this day. While she was here, we discussed a few other things.

She made a comment about how I had always been closer to my father. I told her that it was because he never judged me for who I was. Whether I was in my basketball uniform, ripped jeans with stains or a dress for prom—he always saw me the same. He always saw me as his daughter. I told my mother that’s all I ever wanted from her. But when she would say, “you’re wearing that?” or “you’d be so much prettier if you wore a little make-up,” it cut my heart in two. Those words made me feel like I was doing something wrong.

Needless to say, my mother gets it now. She doesn’t comment about my clothes, my short hair or the fact that I haven’t worn make-up in years. Instead, she tells me that she’s proud of me. But this isn’t about me, really. It’s about Maggie. She lit up whenever my mother walked into the room. No matter who Maggie grows up to be, I know my mother will embrace her wholeheartedly. I know because I saw it in her eyes as she held onto Maggie’s hands while Maggie stumbled about the room. Their relationship is going to be so much different than the one I had with my mother. And I wouldn’t want it any other way.