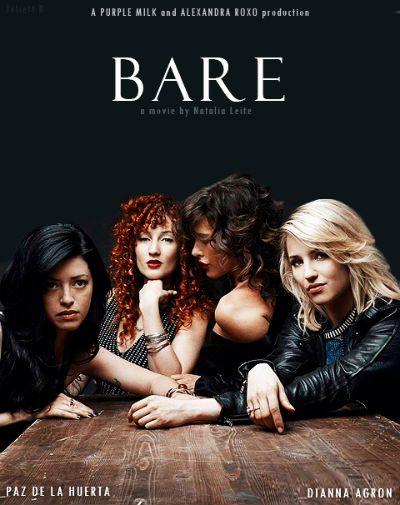 The road which led Natalia Leite and Alexandra Roxo to their Award Winning 2015 feature, Bare.

The journey of the film Bare started over five years ago when Natalie Leite wrote the script and gave it to her friend and producing partner Alexandra Roxo for review. Because the women didn’t have the money to fund their feature they decided to do something in the meantime. That something was creating an incredibly popular webseries called Be Here Nowish which is about two New York City women who travel to Los Angeles to attend a spirituality class. The series is incredibly strange, funny, imaginative, and a must see for any webseries fans.

This series gained such a wide audience that the women were able to crowdfund most of the budget for their feature with the help of the series’ fans. Anyone who has attempted crowdfunding knows that being successful is an incredible, incredible feat and a true testament to the creativity and production value of the series itself.

Bare is Natalia’s directorial debut and what a tremendous cinematic journey it is.

It is a slice of life story about a small town girl named Sarah (Dianna Agron, Glee) who starts to see her life as a prison where her biggest achievement was to hold a job at a large supermarket chain.

Unlike the friends she grew up with who don’t seem to mind the life of a small town, Sarah wants out but has no hope for success. Until one day she stumbles upon a drifter named Pepper (Paz de le Huerta) who brings her into the questionable world of stripping where Sarah becomes addicted to making easy money and dreaming of a life outside of her town in Nevada. Pepper and Sarah find love in one another despite the questionable past and dangerous present Pepper faces due to people she had betrayed on her journey.

Sarah grows, experiments, and finds strength in Pepper to see that she has the ability to live a life of her making. This story truly characterizes a world many of us don’t think about. A world where people are born into invisible prisons and have to take drastic steps to escape.