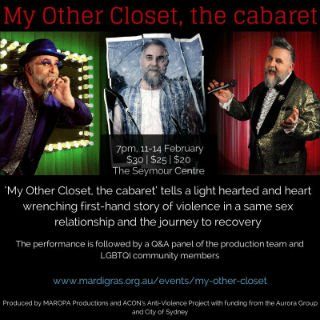 MAROPA Productions and ACON’s Anti-Violence Project (AVP) have come together to produce an exciting musical theatre (cabaret) production about domestic and family violence (DFV): My Other Closet, the cabaret which will show at the Seymour Centre as part of the Sydney Gay and Lesbian Mardi Gras festival.

One part entertainment, one part DFV education campaign, this production is uncompromising in its honesty and courage. It is the true first-hand account of one man’s journey from victim to survivor, told through powerful storytelling as well as piano & crooner re-workings of classic pop songs.

Russ Vickery, who plays himself in the one man production, says “It’s very hard to see past all the violence when you are in the thick of it, but if I could send a message to the former me, I’d tell him that it doesn’t last forever, and there are people who care and can help. One day you will tell your story of pain, joy and life to an audience as a message of hope and a warning for others. You will love again, and it will be amazing”.

My Other Closet, the cabaret dispels the myths surrounding DFV and especially in a same-sex relationship, and helps create stronger communities. Sometimes light-hearted, sometimes heart-wrenching, this layered performance will leave the audience with a lasting impression and keep them thinking and talking about it for many days.

After a full house preview performance for community organisations and DFV support services at the King Street Theatre and a raved about sneak-peak at a national DFV conference in Sydney, ‘My Other Closet, the cabaret’ will now be performed for the general public for the first time. This will be followed by a dynamic Q&A forum of the production team and LGBTIQ support services as well as community members sharing their experiences.

DFV in LGBTI relationships has often been a taboo subject. It can be difficult to discuss or understand.  However, violence in LGBTIQ relationships is now being talked about more than ever before and people are increasingly getting the support they need. There is however a long way to go.

ACON’s Anti-Violence Project has been advocating and supporting people experiencing DFV for many years and have now developed very strong services as well as relationships in this area. So it seemed natural to look at new and creative ways to raise awareness and educate our communities about DFV

Matt Parsons, Producer/Director says “Domestic and family violence and cabaret might seem like an odd alliance but in fact it’s a perfect match. My Other Closet, the cabaret is the true first-hand account of Russ’s experience of domestic violence in a same-sex relationship and his road to recovery. In addition to the fabulous music, what makes this production such a unique and powerful experience for the audience is the knowledge that it’s a real-life story, a story that is more common than most would think and one we would all like to see a lot less of”.

“Russ will take you on a musical journey through the story of his life. Beginning in a gay bar in the 1970’s, we move through his 17 year marriage, and into his first gay relationship; a relationship full of emotional manipulation, psychological control and physical violence. But this story can and does have a happy ending!” says Matt. “You will laugh, cry and be challenged on this powerful journey of resilience and survival”.

The production follows Russ as he finds the courage to proclaim “This is not what love looks like!” in a moving process of healing, with the help of his first love, MUSIC! The show is woven with relics from his past, multi-layered dialogue, and a sprinkling of piano and crooner re-workings of classic pop songs such as “Help!” and “I Will Survive” from performers such as The Platters, Silver Convention, Tammy Wynette, Suzzane Vega, Billy Holliday, Queen and Whitney Houston.

With the help of accomplished composer & musician, Daryl Wallis, and script writing from Regrette Etcetera, ‘My Other Closet, the cabaret’ is a true story of domestic violence told from an insider’s perspective.

‘My Other Closet, the cabaret’ is presented by MAROPA Productions and ACON’s Anti-Violence Project with financial support from the City of Sydney & the Aurora Group. It will show at the Seymore Centre, in Chippendale from Tuesday 11 – Friday 14 February for Mardi Gras 2014.

My Other Closet promotional video:

Tickets are available at: