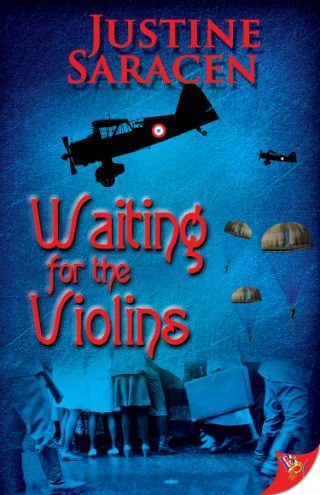 Justine Saracen beams us back into history, writing another memorable novel about unsung heroines of WW II.

Justine Saracen has always done a great job populating history with queer and especially lesbian characters. Her novels are exceptionally well researched and always paint a vibrant and multi-faceted picture of times past. "Waiting for the Violins" is another superb addition to her growing body of historical novels – all written with a good measure of romance. "Waiting For The Violins" is set in WW II and takes us into the heart of the Belgian resistance against the German occupation. The main characters are Antonia, a British nurse with a Belgian background who enters the continent clandestinely to link the British and European war efforts, and Sandrine, a Belgian noble woman and member of the resistancewho operates a rescue line for Allied pilots shot down in Europe.

Justine captures perfectly the mood and setting of a time where no place was safe, where trust was something your very life depended on, and where men and women alike were called upon to prove their mettle. Being steadfast and resisting evil would more often than not mean a concentration camp or death. As always, Justine deftly avoids black and white: nobody is left untainted by the great evil that touched Europe. Not only the Germans, but neighbors, "friends" and even our heroines behave in questionable or even despicable ways, to stay alive or just out of spite or shortsightedness. Those who are counted among the "righteous among nations" and who tried to stem the tide in those desperate times and saved lives very often paid the ultimate price for their efforts.

Justine's book is a monument of remembrance for them and her interviews with survivors or their kin shines through every line of this amazing book. What a great idea to use real names to honor those unsung heroines and heroes. Her first-hand knowledge of the places (Justine lives in Belgium) is another great asset – she takes the reader back into those streets, into the woods and one shivers with cold or rain while re-living the events.

This is a book which stayed a long time with me after I finished it and forced me to ask, what would I have done if confronted with Nazi occupation, about the open discrimination and deportation of my fellow citizens? Would I have dared to resist openly or even helped silently, despite the high penalties meted out? At the end, when “the sobs of the violins,”the secret signal for the beginning of the Invasion comes, we understand why the thundering storm approaching the Normandy coast is music to the ears of those who endured so much to end the madness of one dictator.