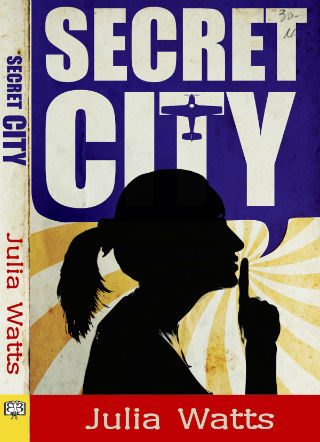 A lesbian novel set in Oak Ridge, the Secret City, during the time when the first atomic bomb was built? That sure got my interest and when I immersed myself into the book it turned out to be an excellent reading choice.

Julia Watts focuses the whole story on Ruby, a young girl of 16, and her fictional diary. And what a fascinating tale of tall times it is. On the surface it records the everyday life of a young girl on the threshold to womanhood, but it manages to convey as well the times and mores of the 1940s.

Ruby comes from a dirt poor, white mountain family from the Appalachians. She is well loved by her family but nevertheless an outsider. In a world where it is the norm that girls drop off school, marry early and raise kids, she loves reading, going to school and writing. And no way is she ever going to marry!

Her luck and the luck of the family takes a turn for the better when her daddy is able to get a government job in Oak Ridge, the Secret City, completely controlled by the government to manufacture the first atomic bomb. Here she finds a vast library, an English teacher who "gets" her and her new friend, Iris. Iris is married to one of the scientists and opens doors to Ruby which she hadn't even known existed. But one of the doors holds an even more forbidden secret then the City itself: Coming out.

The story is warm-hearted, tender, full of interesting, well-developed characters (Eleanor Roosevelt has a small memento too). The poor but loving family of Ruby contrasts nicely with the class conscious but somewhat cold scientists and their elitist wives. Watts gives us tantalizing realistic glimpses into the era and transports the reader effortlessly back in time.

The book ends with a note of achievement and encourages to aim high even in the face of obstacles which seem unsurmountable. This very enjoyable, engaging, well-written and well-edited journey by Lambda-Literary-Award winning author Julia Watts is a worthy read for everyone who will want to explore the times when women started out to become more independent or for all who just want to read a really good historical novel.